How much time should farmers invest in trying to explain modern agriculture to people unwilling to listen?

Feedstuffs journalist and commentator Andy Vance believes agriculture stakeholders need to concentrate their communications efforts on consumers who freely choose food produced by modern agriculture and are either neutral or supportive of using efficiency-enhancing technologies to grow food.

Speaking at Farm & Food Care Ontario’s annual meeting in mid April, Vance cited an International Consumer Attitudes Study (ICAS) that indicates 95% of consumers make food choices focusing on taste, cost and nutrition; 4% make decisions on lifestyle choices such as gourmet, organic and local; while 1% are considered ‘fringe’ – making choices based on bans and protests of production systems and technology. 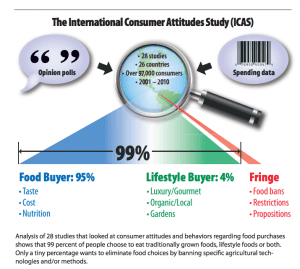 “We spend a lot of time, emotional energy and resources trying to move the needle with that very small percentage of the buying public …who are very angry with modern food animal production practices,” says Vance. He notes the fringe segment is populated by people aligned with animal rights, pro-vegan, anti-meat and anti-GMO movements.

Vance says farmers get very defensive when they’re attacked by this group on the Internet and social media. “I remember when I started on Twitter, my natural inclination was to respond to every person who sent a Tweet in my direction, including people who were hateful and aggressive. I thought it was my responsibility to go back and answer every allegation,” recalls Vance. 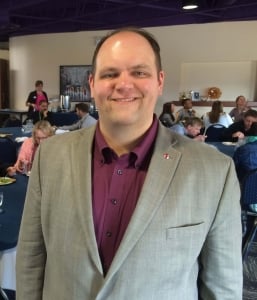 Andy Vance says farmers need to tell their story but it’s an exercise in futility to constantly get in the mud and wrestle with the pigs out there on the Internet.”

But Vance changed his approach when he began noticing most of the loud and aggressive people he engaged with had only 50 or 60 followers. He realized he was actually giving his detractors a bigger platform by answering their allegations. “I was giving them an opportunity to set the terms of engagement – that’s foolish,” says Vance. “My responsibility should be to tell my story, share the information I think is relevant and ignore, as best I can, the vocal super minority.”

Vance acknowledges that there are issues that farmers and farm organizations need to talk about. “In the swine industry, it’s very valid that we have a conversation about sow housing….I don’t like that the terms of engagement were set by our enemies and detractors.”

Vance believes farmers need to be proactive and ensure they are always doing what’s best for their animals and customers, “but it’s an exercise in futility to constantly get in the mud and wrestle with the pigs out there on the Internet.”

Related: Frustrated With Consumers — The Story Behind My Viral Venting