Does a cow need to have a calf to give milk?

The answer should be obvious, but more than 70% of consumers get the question wrong explains University of Guelph associate professor Mike Von Massow. A majority of Canadians also believe that a chicken is processed for meat when it reaches four years of age.

Von Massow shared these findings from his research on consumer perceptions of food at the Farm & Food Care Ontario annual meeting earlier this month. While many of the findings are troubling for agriculture there is also reason to be optimistic. “Consumers feel pretty good about the food they eat in Canada. Generally they believe they have safe, healthy food and they trust farmers,” says Massow. 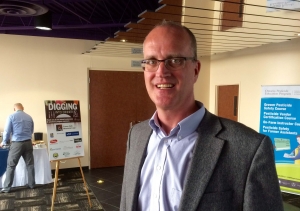 University of Guelph’s Dr. Michael Von Massow says consumers’ lack of rudimentary understanding of food production leaves them “susceptible to information from all over the place.”

What consumers don’t know is how their food is produced. As evidenced by those milk and chicken stories, “it’s more than just a little bit of a misunderstanding…. We have this real lack of rudimentary understanding of food production which leaves (consumers) susceptible to information from all over the place.”

Von Massow applauds the efforts of organizations like Farm & Food Care and emphasizes that it’s important that consumers hear from farmers. “Unfortunately, consumers hear more from Dave at A&W than they do from farmers,” he says. “People feel good about farmers. It’s harder to get share of mind, but if we can get in front of them, they will listen to what farmers have to say. Farmers are credible. Farmers are believable. We just have to find a way to do it.”

Related: Forget The Fringe. Don’t Wrestle With Pigs On The Internet