After reporting a record profit for 2015, Marty Seymour, chief executive officer (CEO) of Canadian Western Agribition, reported something else. As of May 1, 2016, he will be stepping down.

Seymour’s LinkedIn profile describes him as someone “motivated to make a difference,” and many who have graced the cattle-filled halls of Agribition would agree that he has done so there. 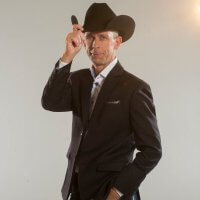 In his time as CEO, Seymour was at the helm of initiating the Indigenous Agriculture Summit and the Grain Expo. He saw the start of a new commercial cattle program, participated in the opening of The Yards, and in the last year, helped facilitate the partnership with the Canadian Professional Rodeo Association. He was also involved in planning and securing funding for a new home for the show, as construction is underway on the $37 million International Trade Centre that’s scheduled to be finished in time for the 2017 edition of Agribition.

And since his early days, Seymour has become increasingly active in the media, from agreeing to interviews while walking the show floor to guest hosting one of Regina’s morning television shows. He’s also volunteered as a mentor for Cattlemen’s Young Leaders, and this year, he joined a crew of three other judges for Regina’s Event of Events competition.

Seymour has been with Agribition for nearly five years, and in 2014 he was named as one of CBC Saskatchewan’s Future 40. He has accepted a new role, and will be joining Farm Credit Canada as director of industry and stakeholder relations.

Congrats to @MartySeymour1 and the @Agribition team on organizing another successful show! https://t.co/mNcelTxuj2

@MartySeymour1 is why I got involved with @Agribition . Sad to see him go, but excited for him and his new adventures.

Hey @MartySeymour1 , all the best to you in whatever’s next! You’ve been a great guest on our show many times! https://t.co/V7tMZO7QAU

Related: End of an Era for Agribition