Ask Francisco Rodriquez a question about dairy robots and he’ll tell you about people.

With more than 38,000 robots milking cows on 19,000 farms around the globe, the technology is becoming ubiquitous throughout the dairy business. But what does it mean for dairy producers as technology revolutionizes the traditional daily milking grind?

“The future in any business is, has been, and will be the people,” says Rodriquez, DeLaval’s North American manager for robot milking and feeding. “Any technology that we produce whether it be robots, you name it, the most important thing is how people are going to use it in the future.”

Speaking at the Canadian Dairy XPO in Stratford, Ontario in early April, Rodriquez shared insights on the role robots are playing in attracting the next generation of farmers, helping farm managers to work smarter, not harder and empowering women to take a greater role in milk production management. 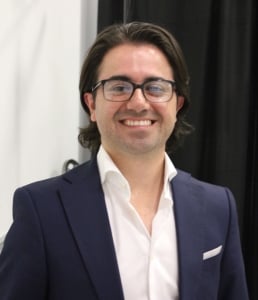 Rodriquez says it’s fascinating to watch how farm kids are drawn to robots. “It’s very natural. The kids right now are born with a different chip. They are used to iPads and cell phones, they are used to managing everything digitally. And when we talk about robots it seems that we are talking their natural language.”

With huge generational transitions of dairy farm ownership expected in coming years around the globe, Rodriquez says it’s vitally important that manufacturers speak the language of technology. He notes that next generation dairy farmers are actively seeking technology to help improve dairy management, sustainability and make the business more flexible for a generation that doesn’t want to physically milk cows seven days a week.

The farm manager is seeing a dramatic change, says Rodriquez. They now have more time to focus on business management rather than spending most of their time on labour and milking cows.

Robots also allow producers to do “management by exceptions,” says Rodriquez. “Instead of focusing on all the cows every single day, technology can filter the cows that really need our help.”

Data availability is having a huge impact. “When you have the numbers and the right performance indicators, you can make the right business decisions,” says Rodriquez. “But with no data, modern cows are like driving a Ferrari at 400 kilometres per hour blind. We need to have the right tools to manage these high-yielding cows.”

When discussing robots, many producers note a significant lifestyle impact, but Rodriquez emphasizes that installing robots “doesn’t mean no work, that’s the wrong expectation….it means great managers, great cow people will have flexibility, more quality time with their families and quality time for their business.”

In his global travels, Rodriquez has also observed the significant impact robots are having on women and the role they play in a dairy operation.

“Very often when we go to dairies, women are taking care of the books because they’re interested in numbers and the men take care of the cows,” says Rodriquez. “As soon as robots come, with all the data that robots produce, women start having more interaction with the herd.” Women who manage the computer often end up running the herd; they’re making the decisions, and creating strategies, he adds