With maps of moisture extremes popping up across the prairies, and predictions of another dry year, it’s hard to know what to make of seeding. But, as Murray Hartman, oilseed specialist with Alberta Agriculture and Forestry points out in this episode of the Canola School, there isn’t much sense in panicking. Not yet. 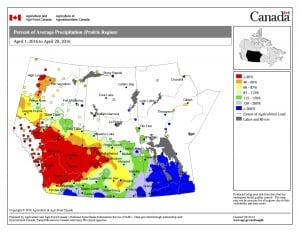 “I think one of the big points is that it’s still really early,” says Hartman, “so to be worried about putting seed into dry ground…it’s less of a concern right now than say middle to late May.”

There are a few points to consider when deciding how to manage spring seeding in the face of drier-than-usual conditions. First, asks Hartman, have you dug around in the soil? Do you know where the moisture is?

At this point, if soil moisture is below an inch, there isn’t much sense chasing it.

“If you go deep, you’re predisposing that seed to colder soil, you get a longer hypocotyl, and we know that when there’s a long hypocotyl — the stem under the ground — it predisposes it to more seedling blight diseases.”

Hartman’s other suggestions for points to consider are all here, in this conversation with guest host Dan Orchard, of the Canola Council of Canada.

As for fertilizer, Hartman says there are some competing issues.

“If you put too much fertilizer with the seed — even if you’re banding away from the seed, but your separation isn’t good — in a dry year, that will hurt emergence and germination.” But, if you think you should do a separate pass, that’ll dry the soil out even further. Both situations could aggravate an already dry soilbed.

And if you like the idea of cutting back on fertilizer, well…

“You’re kind of accepting losses right away then,” says Hartman, “and then if the conditions improve, now you’ve got to try to put more nutrients on in-crop, which is generally less efficient.”

Overall, Hartman — alongside guest host Dan Orchard of the Canola Council of Canada — suggests increasing on-row packing pressure and going ahead with seeding-as-usual.