The evolution of the Canadian Dairy XPO continued last week as the Stratford, Ontario-based dairy industry event moved to April and unveiled its new We Cover Cow Coliseum.

General Manager Jordon Underhill was joined by a host of stakeholders for a ribbon-cutting ceremony to officially open the permanent 440′ x 72′ Cow Coliseum located on the south end of the complex. “It’s an amazing structure. It’s grey outside but it’s nice and bright in here. It’s a great place to display innovation,” said Underhill in an interview on day two of the April 6-7 show. 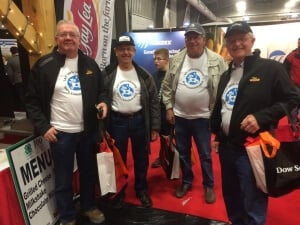 In four years the XPO has evolved from primarily a local dealer event to attracting large corporate and brand interests. This year the show added an international component with companies like ADF and Afimilk attending for the first time. Underhill said he talked with many producers who were excited to connect with these companies. “If you don’t travel outside North America, this is likely the first time you have seen some of this technology.”

The building hosted Cheese Fest on the opening day of the XPO as producers, industry players and consumers jammed into the new facility to connect and enjoy some of Canada’s finest cheese. “There’s energy and vibrancy in this Canadian market. It’s definitely related to supply management and we’re proud of that,” said Underhill. 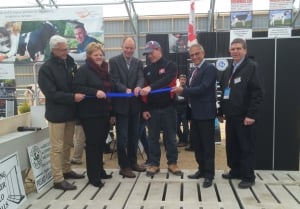 Throughout the show many producers proudly showed off their Canada Blue Cow t-shirts, which were made available through sponsorship from Dairy Farmers of Canada. Underhill says one of the goals of the promotion is to help build pride in the industry.

“Hopefully these producers not only wear the brand around the show, but they wear it through their communities as well. I talked to a producer who’s been milking cows for 42 years and yesterday he had his first Blue Cow shirt. He was very proud of that.”

Official attendance numbers have yet to be released. Underhill hoped moving the show from its previous February time slot to April would bring better weather, but one last blast of winter arrived just in time for the XPO. “The weather seems to follow us from February to April. I think it’s a unique year to get this weather, but it didn’t affect attendance. We’re probably right on par with last year’s show in February.”