As the US dairy industry struggles with low milk prices, a number of trends continue to drive a make over of the country’s dairy farm operations.

Overall, the size of farm operations continues to grow rapidly, says Mark Stephenson, University of Wisconsin’s Director of Dairy Policy Analysis. Stephenson told farmers attending the Canadian Dairy XPO in April that half of US milk is now produced by 3% of the country’s dairy farms with most of the growth occurring in herds 3,000 head or greater.

“When you start to add cows in 3,000 animal increments, that’s a lot of milk production and it does displace a number of 100-cow operations,” says Stephenson. 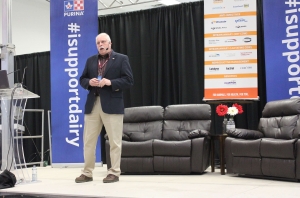 University of Wisconsin’s Mark Stephenson says milk surpluses are creating challenges for producers in the northeastern US and the western region of the country.

The southeastern portion of the country is an area that’s having real problems, says Stephenson. “Our increasingly high yields on milk mean that cows have a lot of body heat to dissipate and, as they do that, it’s harder for them to produce milk … in the hot and humid regions of the United States.”

The US industry is also being challenged by milk surplus, especially in the traditional areas. Michigan, Wisconsin and Minnesota have a lot more milk than population and the need for milk products. Surpluses are also problematic in the west. California has a lot of people, but there’s also a lot more cows, notes Stephenson.

He’s also seeing a dramatic change in farm business models. Many larger farms are now purchasing land to manage manure issues and grow their own forage. “These are assets that some of those intensive farms of the west didn’t really want. Land is expensive to own and so is the machinery to plant and harvest feed, but when you do that you moderate some of the costs on purchased feeds and you have access to land to supply manure,” explains Stephenson. “That gives you higher fixed costs on a farm and lower variable costs.”