High fives all around for DuPont Pioneer. The newly minted global Access to Seeds Index — a measure of how leading seed companies are contributing to global food security — has named DuPont Pioneer the world’s best firm for trying to improve smallholder farmer productivity.

Syngenta deserves kudos too; it isn’t far behind. In fact, it actually topped the Access to Seeds Index for companies developing vegetable seeds.

But it’s DuPont Pioneer that’s primarily been singled out by the index’s creator, the Amsterdam-based Access to Seeds Foundation, for its crop achievements.

“DuPont Pioneer outperforms its peers with a strong breeding program aimed at developing seed varieties that are suitable for regions with so many smallholder farmers,” it said. 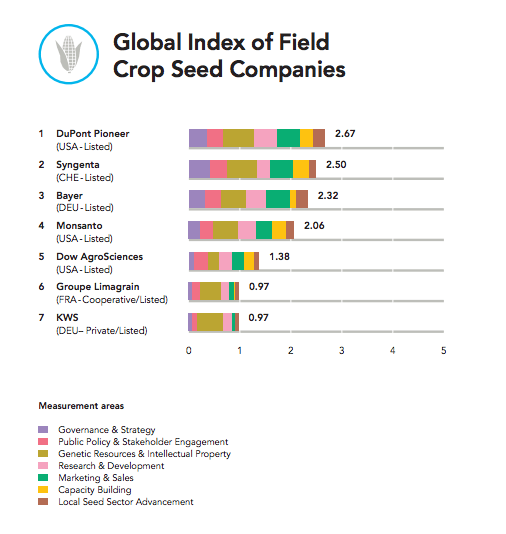 This all sounds a little promotional. But it’s a significant accolade, particularly given this is the index’s first pronouncement. The initiative was launched in 2012, with input in the index design from smallholder farmers (defined as those with about an acre of land), the seed industry, governments, academics, seed companies and others. They ultimately settled on a set of criteria that would lead to what they believe is a true measure of intent to help smallholder farmers get ahead.

Why smallholders? Well, there’s widespread agreement across the board that if the world is going to achieve the goal of zero hunger – one of the United Nations’ sustainability goals – smallholder farmers will need to be more productive. Among their needs is better access to better seed.

Overall, better seed is not a problem for the likes of DuPont Pioneer, Syngenta and other companies. Through research and development efforts they’ve helped modern farmers throughout the world achieve higher yields and greater profitability. Some desirable seed, plant and agronomic properties are becoming universal, particularly drought tolerance and nutrient deficiency.

And it’s this seed technology that smallholder farmers are lacking. The foundation says the seed industry is ideally positioned to boost productivity in regions considered to be the world’s most food insecure: Sub-Saharan Africa, south Asia, southeast Asia and parts of Latin America. “Access to such seeds will help farmers increase yields, improve nutritional quality and deal more effectively with climate change,” it says. 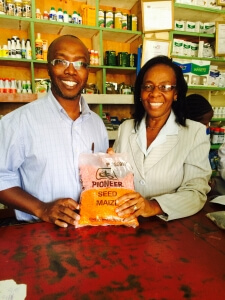 However, the industry has not performed well there. Only 2.5 per cent of the seeds used by smallholder farms in sub-Saharan Africa, for example, come from seed companies. Much of it is grown by the farmers themselves and saved for next year’s crop, meaning no new traits are introduced. That situation prevails — a whopping 80 per cent of food needs are met by smallholder, subsistence farmers, who produce little for anyone other than their own families.

There are millions of such farmers. So how does the leading contender, DuPont Pioneer, go about supporting them to achieve a higher production level?

Bryce Eger, Business Director, DuPont Pioneer and DuPont Crop Protection Canada, says mostly the company uses people power, in situations where it can measure participation – such as direct sales in developing countries with smallholder famers, much like it does in Canada and the US. It knows agronomy requires big picture thinking.

“Seed is the starting point, and farmers need access to quality inputs such as seed and crop protection products, no matter where they farm,” he says. “But there’s the whole infrastructure at the front of the gate that’s important too. These smallholder farmers are the agents of change for food production in their countries and we want to help them to be more productive, so we’re involved at the local level everywhere.”

In countries without a functional dealer network, DuPont Pioneer trains and sells through sales people, who are often farmers themselves.

It responds to cultural norms. In China, Eger says the company’s agronomists team up with agricultural professors at universities to train farmers on planting techniques and agronomic practices. This program has worked well, he says, attracting hundreds of thousands of farmers. 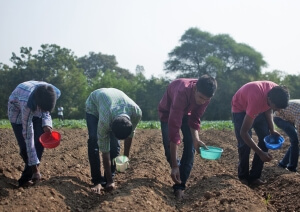 Farmer education in India. Photo via Access to Seeds.

In India, the company has developed experts at the village level. The Rice Farm Schools Program, a collaboration by DuPont Pioneer, DuPont Crop Protection and the Uttar Pradesh Department of Agriculture, has plans to provide more than half a million smallholder farmers with practical expertise and training, from seed planting to harvest. It has enrolled more than 5,000 farm school trainers, who oversee hybrid seed and demonstration plots in 5,200 villages, engaging 120,000 farmers. The program is solely responsible for about 15 per cent of the country’s rice production.

And in Africa, the company has created the Pioneer Extension Partners (PEP) program to reach and service two million farmers. PEPs, who are farmers themselves, connect with as many as 50 other farmers from the community, who each directly influence more than 500 farmers. DuPont Pioneer sales agronomists and sales reps are the primary recruiters.

All this, says the Access to Seeds Foundation, makes the company the world’s biggest hope for improving smallholder potential in crops, and helping meet the needs of the growing population.

Says Eger: “Respect for people is one of the core values of DuPont Pioneer. You can’t show much more respect than enabling people to have food and be able to eat.”