Move over Ellen, Dr. Phil and Dragons’ Den. A cooking show about food and farming is ranking higher than many network television shows on CTV in Manitoba.

Currently airing its 26th season, “Great Tastes of Manitoba” is a partnership between eight commodity groups representing Manitoba farmers, Manitoba Agriculture and Manitoba Liquor and Lotteries. Each episode features a guest from one of the farm groups preparing dishes made with grown-in-Manitoba ingredients, as well as a product expert pairing a beverage with each entree.

In the prized “female viewers aged 35 to 55” category, it was one of the top 50 watched shows in the province (42nd overall) last fall — the only cooking show to make the list. Overall, the fall 2015 ratings showed a 35 percent increase for Great Tastes among adults in Winnipeg and a 16 percent rise with adults across the province.

“Despite the ongoing trend of local television numbers trending downward, Great Tastes is still reaching 26,000 viewers per week,” says the new senior producer for the show, Donalee Jones, in the interview below. “It was a nice boost for us going into prep for season 27.” 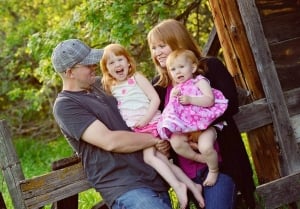 Jones, who describes herself as “primarily a mom, then a farmer, then a TV producer”, is taking over production of Great Tastes for season 27 following the retirement of long-time producer Don Horby. Not only does she have 15 years of of television and film experience, she farms 2,000 acres of grains, oilseeds and pulses with her family near Cartwright, Manitoba. Jones is also involved in her parents’ purebred cattle operation near Baldur, and served as the secretary/treasurer for the Manitoba Simmental Association for the last eight years.

Needless to say, she’s bringing some farm experience into producing the consumer-oriented program. And she’s looking forward to introducing viewers to more of what happens on farms like hers.

“The show, when it began 26 years ago, was kind of intended to mask that agricultural message behind a cooking show, and now we’re finding the market is so much more open to learning about food and the farmers that grow it and they want that information,” says Jones. “We’re hoping to shift the focus and talk a lot more about the farmers, how the food is grown, the sustainability of that food and the safety of that food.”

With farmers being urged to ‘tell their story’ to bridge the increasing distance between consumers and the farm, she says Great Tastes offers a unique and valuable opportunity in a traditional media format.

“There’s a barrier to entry to TV. In most markets, farmers don’t have access to videography or television,” says Jones. “Great Tastes is ahead of the times in that way in the sense we’ve been agvocating for Manitoba farmers for 26 years before agvocating was even a thing.”

Donalee Jones visited the RealAg studio at CropConnect to chat about Great Tastes and the direction she plans to take with the program: