The United Nations Food and Agriculture Organization hosted an international symposium in Rome last month on The Role of Agricultural Biotechnologies in Sustainable Food Systems and Nutrition. The FAO’s goal for the event was to debate and exchange ideas on how biotech can benefit smallholder farmers — both in sustainability and nutrition — in the context of climate change.

“We have unlocked the door to discuss and analyze how agroecology and biotechnology can live together and be used as complementary options. This is an outstanding achievement,” FAO Director-General José Graziano da Silva told symposium participants. “It opens a window of opportunity for the development of new technologies that could make agricultural sectors more sustainable in the future. We also agreed that tools and approaches must be useful and accessible for all farmers.”

“We thought it was important to have a seat at the table and talk about things that really help farmers,” he explains in the video below. 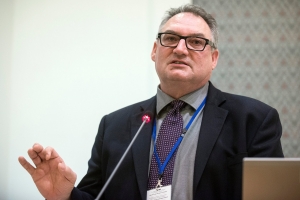 The CCGA co-hosted a session with the Brazilian Confederation of Agriculture and Livestock where farmers from Canada, Argentina, the Philippines and Kenya shared their perspectives on biotechnology.

“We export so much of what we produce, so when people throw up artificial barriers to science, it really hurts us when we’re talking about exporting our products around the world,” he explains.

He also noted how biotechnology has allowed Canadian farmers to substantially reduce the amount of tillage that occurs on their farms.

The FAO, meanwhile, emphasized that biotechnology encompasses much more than only genetic modification, referring to “low tech” applications, such as as fermentation processes, bio-fertilizers, artificial insemination, the production of vaccines, disease diagnostics, the development of bio-pesticides and the use of molecular markers. Graziano da Silva directly addressed criticism that participation in the meeting skewed toward private industry.

“Let me reassure you that FAO does not support transnational corporations. FAO is a neutral forum and we stand by our mandate to eradicate hunger and malnutrition,” he said.