The number of soil tests in Manitoba with phosphorus concentrations below the critical level for crop production grew by 7 percent between 2010 and 2015, according to the new North American Soil Test Summary published by the International Plant Nutrition Institute.

Alberta, Saskatchewan, Manitoba and Quebec, as well as 13 U.S. states, all saw more than half of their soil samples testing below the critical levels for P (find more on the IPNI report here.) 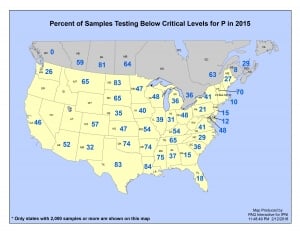 While phosphorus fertility is declining in some crop-producing areas, phosphorus amounts are too high and climbing in places where crops are being consumed — cities and areas with high levels of livestock production.

“The long term sustainability of both our food production system and our water quality depends on a much more equitable balance of phosphorus management, avoiding those deficiencies and excesses,” explains Don Flaten, soil scientist and phosphorus expert at the University of Manitoba, in the video below, filmed after his presentation at CropConnect in Winnipeg last month.

Higher yields, especially in canola and soybeans, are one of the reasons more soils are becoming P deficient on the eastern prairies.

“Canola and soybeans are removing between 0.8 and 1 pound of phosphate per bushel. That’s a big export and we don’t always replace that same amount,” he says. “Fertilizer prices are high enough that farmers don’t necessarily want to boost their fertilizer rates to fully compensate for that removal.”

Flaten notes there may also be a link between phosphorus trends and land tenure, as a farm renting land is less likely to build phosphorus reserves.

The most cost-effective way to address the increasing phosphorus disparity is to encourage crop and livestock producers to work together locally to help each other balance their phosphorus input and output, he says.

“At a much larger scale, the fundamental challenge that we’re facing is agriculture is growing all this food that contains phosphorus and other nutrients, exporting it to consumers, and then the consumers don’t recycle those nutrients back,” he explains. “Here in the City of Winnipeg, for example, we dispose of our wastewater and nutrients into the Red River or into the Brady Landfill. There’s virtually no recycling of those nutrients and that’s simply not sustainable in the long term.”

Stay tuned for a follow-up conversation with Don Flaten on new research looking at how cities can potentially recycle phosphorus for use in crop production.