Young Agrarians grew by a province this year, with the new Alberta chapter receiving the 2015 Community Agricultural Grant from Peavey Mart — a fifty thousand dollar award given annually to a project that helps strengthen rural communities.

“Young Agrarians is an initiative that came out of British Columbia, and really it’s an opportunity for young people…to get together and network,” Dana Penrice, coordinator for the Alberta chapter told RealAgriculture in an interview (included below). “And not just young farmers — new farmers of all ages.”

The aim of the group is largely to bridge gaps, to provide opportunities for collaboration, learning and networking. 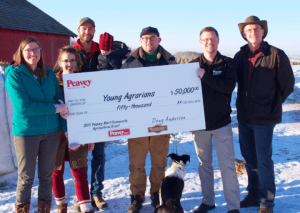 “The Young Agrarians program provides a sense of community to young farmers to help them be successful,” said Peavey Industries president Doug Anderson, in a release. “That kind of coordinated effort is a force to be reckoned with, and we’re delighted to help the next generation of farmers to succeed.”

The Alberta group has already started work, organizing mixers, field tours and potlucks. Around 140 people attended their most recent networking event, held during the first evening of the Organic Alberta Conference in February. And, more events are already scheduled, including a potluck on March 8 in Pigeon Lake, and a farm tour May 21-22 near Castor.

For more information, or to suggest an event, head to Young Agrarians Alberta archives, or send an email to [email protected].