A group of farmers from across Western Canada headed down to New Orleans last week to not only take in the annual Commodity Classic farm show, but also attend the Western Canadian Wheat Growers’ annual convention.

Now why would a prairie farm group hold its annual meeting in the southern U.S.? (It just happens the Canola Council of Canada was holding its annual convention in San Diego at the same time.)

Wheat Growers president Levi Wood joined us to answer that question and share what he learned spending time around the port that handles much of the fertilizer imported into and grain that’s exported from North America.

“The Port of New Orleans is a massive exit point and entry point for a number of products that we use on our farms,” he explains in the interview below. “Some grain from Canada does exit North America through the port. As well, Canadian companies like CP and CN have big presences in New Orleans.”

“We’re really in a North American system and just seeing some of these things put it in perspective how our whole industry works together in North America,” says Wood, who farms near Pense, Saskatchewan. 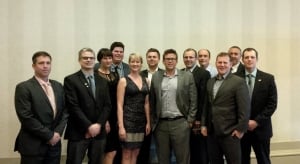 The continental nature of the grain industry has become apparent since the end of the Canadian Wheat Board’s single desk, a change which was championed by the Wheat Growers. Despite having accomplished one of their primary goals, Wood says they still feel the organization has an important role in speaking for farmers and shaping grain industry policy, noting the group’s membership has grown since the end of the CWB single desk.

The Wheat Growers’ 47th annual convention will be held in early 2017 in Saskatoon.