Do you know which fields make you money and which ones don’t? At what point in the year do you sit down and determine what your breakeven costs are for a specific piece of land?

The FieldValues app was designed to help farmers keep information about costs and break-even prices current throughout the growing season.

As Benjamin Bergen explains in the video below, he custom developed the app several years ago for a large farm in southern Manitoba.

“The farm wanted better visibility on where the cash flow was, crop by crop, field by field,” he says. “If it’s August, are we losing money on this field already? Should we be spraying fungicide on that crop? Or if I’ve lost money on the field three years in a row, should I not be renting that land anymore?” 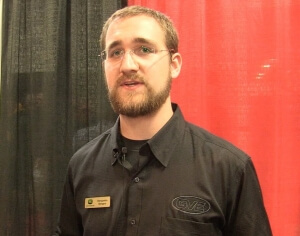 Benjamin Bergen developed the FieldValues app to help a farm in his area track costs.

After building the app and realizing it could work for other farms, his employer — Greenvalley Equipment — became interested and added the app to its product offering. Bergen now serves as the Integrated Solutions Manager for the John Deere dealership chain in southern Manitoba. As he notes, Ag Days in Brandon earlier this year was the first major show where the app was promoted to a broad market.

He figures maybe five percent of farmers have a good idea on a field-by-field basis what their costs are.

“This is a good step to get in the mindset of tracking the costs,” says Bergen. “It’s a lot better than ‘where did that notepad go from two years ago?’. If you can have it all on your iPad and pull it up wherever, it’s a big advantage.”