A red spring wheat variety that accounted for more than 20 percent of wheat acres in Western Canada in the early 2000s has been chosen as the 2015-16 Seed of the Year West.

CDC Teal was developed by Dr. Geoff Hughes and Dr. Pierre Hucl at the University of Saskatchewan’s Crop Development Centre and supported for registration in 2000.

“CDC Teal was one of the first CWRS varieties to be included in the Warburton IP program,” noted Ron Weik, Seed Portfolio Manager FP Genetics. “It’s bread-making attributes were ideally suited to their requirements. That laid the foundation for an enduring partnership between growers and Warburton that continues to the present day. CDC Teal was a flagship variety for FP Genetics until it was ultimately phased out as newer, improved varieties became available.” 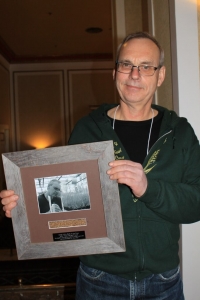 The western award also includes a $4000 scholarship, awarded to a student enrolled in a western Canadian university and currently completing a Masters or Ph.D. in plant breeding or genetics. Sean Asselin, a Ph.D. candidate at the University of Manitoba focused on characterizing perennial sunflower species, received this year’s scholarship.

The Seed of the Year program is designed to provide recognition to publicly-developed varieties that have made a significant contribution to the economy, agriculture, and the Canadian public in general. The Seed of the Year West program is sponsored by Agriculture and Agri-Food Canada, Alberta Barley Commission, Canterra Seeds, Cargill, Canadian Seed Growers Association, FP Genetics, CPS Canada, Richardson International, SeCan, and Western Grains Research Foundation.