Originally formed in 2013, the Network now boasts over 1000 followers on their Facebook page.

“We were initially focused on connecting young professionals,” said Jennifer Christie, the network’s Chairperson, in a release. “But over time, our membership grew to include women from all facets of the industry with varying degrees of experience and things started to really take off.” 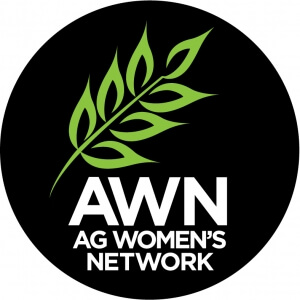 Part of the announcement included an unveiling of a new logo, which the AWN is calling “bold, modern and feminine.” It was designed with the help of three agri-marketing professionals, working on donated time.

The Network has also seen some changes to its structure, with a Leadership Team now overseeing annual planning and governance, with advice provided by Advisory and Mentorship Teams. Other member involvement will include work with communications, event coordination and partnerships.

Related: Passion is the Fuel for New Ag Women’s Network

This interview was taken shortly before the announcement yesterday, at the Advancing Women Conference in Calgary.

“I get especially excited when I see women reaching out to help other women in the group, connected only by their mutual love of agriculture and a strong desire to support each other. The impact the Ag Women’s Network has had in such a short timeframe is amazing,” said Christie.

The organization will be exploring ways to facilitate chapter development across Canada, hoping to ultimately expand its reach beyond its Ontario base.

“Our mission is all about connecting and empowering women through networking and learning from each others’ stories.”