When it comes to flax, farmers want to see two things: higher yields and easier straw management, says the chair of the Saskatchewan Flax Development Commission.

While flax grower organizations have invested significant resources over the last few years in researching agronomic practices for higher yields, Erwin Hanley, who farms south of Regina, says they’ve realized they also need to address the challenges with residue management at the end of the year.

“Straw tends to be the drawback for some producers who don’t grow flax,” he says in this interview, filmed following SaskFlax’s 2016 annual meeting in Saskatoon last month.

He notes SaskFlax has been meeting with Helen Booker, who runs the lone flax breeding program left in Canada at the Crop Development Centre in Saskatoon. Hanley explains they’d like to see the development of a determinate plant that ripens before harvest so straw can be chopped by a combine and incorporated into the soil rather than dropped to be burned or baled. 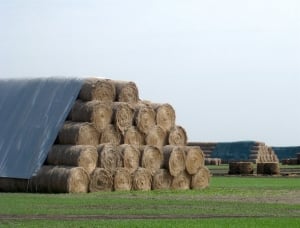 “Going forward, genetically we have to look at ways to see if we can deal with the straw within the plant,” he says. “It’s a ways away, but we realize we need to focus on it.”

It’s also a marked shift in mindset regarding the biomass market, as Hanley believes the flax industry needs to focus less on growing straw for fibre markets and more on making it easier to grow more seed.

“Just when you thought there was potential, then there wasn’t. The markets are low margin markets,” he notes. “By the time you deal with the straw in the field, transport the straw and get it to market, the margins just aren’t there for the producer.”

Flax acres plummeted after Canada’s largest market — Europe — closed its border following the discovery of traces of the genetically modified Triffid variety in 2009. However, acres in Western Canada have climbed every year since 2011. According to Statistics Canada, just over 1.6 million acres of flax were seeded in Western Canada in 2015. Agriculture and Agri-Food Canada’s preliminary forecast for 2016 projects a 5 percent increase in acres.