The first secret of soybean success really isn’t much of a secret, confesses agronomist Ross Bender.

It all comes down to the weather, specifically rain in August. But farmers do have an opportunity to impact the remaining production factors that make up the six secrets of soybean success, says Bender, senior agronomist for the Mosaic Company, who joins us on this episode of Real Agriculture’s Soybean School. 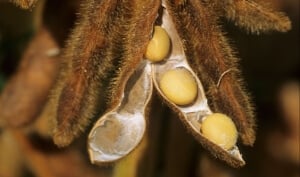 Last month, Bender told those attending the SouthWest Agricultural Conference that too many farmers are missing yield opportunities by failing to optimize soybean fertility – success secret #2.

“80 percent of US farmers do not fertilize P or K before their soybean crop. Most farmers have the perceptions that it’s not needed,” says Bender who notes that phosphate is critical for the production of compounds that fuel the plant’s ability to produce seed.

More than ever, Bender says it’s also important for farmers to ensure adequate nutrition throughout the growing season. This gives today’s higher yielding soybean varieties and cultivars – success secret #3 – a better opportunity to produce a higher percentage of their genetic yield potential. Bender emphasizes that yield is truly created at the back half of the growing season and to put bushels in the bin it’s critical for the farmers to meet the plant’s late-season needs for phosphates, sulphur, nitrogen and zinc.

Soybean yield is determined by three key components: pods per plant, number of seeds in each pod, and the weight of each soybean pod. The math is pretty simple when you look at it – 1 pod per plant = 2 bushels per acre.

Bender says foliar protection – success secret #4 – helps to minimize the loss of the three yield components. “By applying foliar fungicide, not only do you protect the soybean leaf from disease, you help to keep the plant’s ‘lights on’ longer so it continues capturing sunlight and converting it into biomass and yield.

Seed treatments check in at #5 on Bender’s list of success secrets followed by row spacing at #6. He says narrower row spacing (e.g. 20” versus 30”) typically out-yield wider rows, but they do require more capital cost when it comes to planting equipment and a significant management commitment.

“Row spacing is not a silver bullet approach,” says Bender. “ You can not just change one management practice and significantly increase yield. It really is a systems approach to agronomic management in soybeans. Row spacing is one of those tools. If you want to intensively manage your soybeans, narrow row spacing will give you the most bang for your buck.”