Oat futures in Chicago have fallen steadily since early December, dropping to their lowest level in over five years. 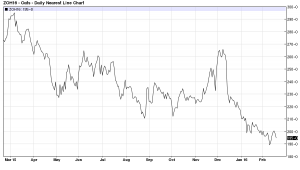 Daily nearby oat contract in Chicago over the last year (click to enlarge; via barchart.com)

“They just happen to be one of the uglier (markets) at the moment, both old crop and new crop. We’ve seen oat futures collapse quite quickly,” says Lorne Boundy, oat trader with Paterson Grain. “They’ve actually been falling faster than the Canadian dollar, so the Canadian dollar hasn’t been as supportive to oats as it has other commodities.”

Stopping by the Real Agriculture booth at CropConnect in Winnipeg last week, he said cash bids ranged from $2.80 a bushel in Manitoba down to almost $2 in Saskatchewan.

“If I was in Saskatchewan, I wouldn’t be growing oats at $2 a bushel. I’m expecting Western Canadian oat acres to decrease by at least 20 percent given new crop numbers that are out there,” he says.

Boundy discusses what’s driving oat values lower and the potential for a tight oat supply situation (and a price spike) later this year: