It’s another year of opportunity for barley, says the barley merchandising manager for Viterra.

After declining for much of the past decade, the number of barley acres in Western Canada rose slightly in 2015 and is expected to grow again in 2016. Agriculture and Agri-Food Canada’s preliminary projection has barley acreage rising by two percent. 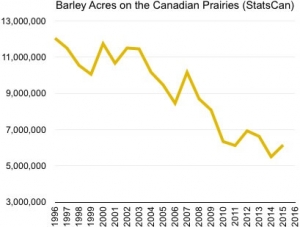 “We’re expecting an increase of five to 10 percent, depending on profitability relative to other crops,” says Viterra’s Kenric Exner. “Right now malt barley is probably in the top three to five commodities.”

There’s been growth in demand for Canadian barley on both the domestic and export fronts, he says, especially in China, where government policies made domestic feed reserves expensive relative to barley imports. Chinese malt barley demand, meanwhile, continues to grow year-over-year, says Exner.

AAFC forecasts domestic barley use will increase by 3 percent this year due to higher feed demand for cattle and hogs. Exports are projected to grow by another 18 percent due to a lower world supply.

Exner discussed the supply/demand situation for barley, the need for consensus on new malt varieties and the growth in demand due to the popularity of craft beers following the SaskBarley annual meeting in Saskatoon:

Related: Which Malt Barley Should You Grow in 2016?