Tractors keep getting bigger and bigger, but with the advent of automation, do we really need 500 HP tractors?

“The current trend to increasingly larger equipment may change if we begin to automate that equipment,” says Shearer, Chair of OSU’s Food, Agricultural and Biological Engineering department. We’re already seeing evidence of this trend in the form of tractor guidance and steering systems. He believes it won’t be long before the human element is no longer required to operate a tractor.

“A lot of what we do today is predicated on human operators … being in total control of the machine. As we continue to automate we remove more machine functions from that individual.” Those functions, Shearer contends, can be relegated to a person who monitors equipment rather than operating it.

So what happens to your 500 HP tractor? Shearer suggests that automated 50 HP to 70 HP tractors will replace it. He told those attending the Ontario Certified Crop Advisors annual meeting earlier this month that reducing compaction and its effects on crop production and yield is the key to making this vision become reality. 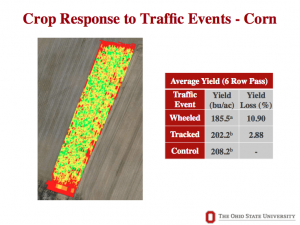 “The funds for automation are going to come from improvement in soil structure,” says Shearer who draws on 2015 OSU research to support his theory. These trials indicate that soil compaction caused by wheeled tractors can create yield losses of more than 10 bushels per acre.

TechTour: The Future is Now With the Greenbot Driverless Tractor

“In the case of a typical 500 HP tractor you are going to need between 110 and 120 pounds of ballasted tractor mass to harness the engine power and turn it into drawbar power. When you ballast the tractor that way it means you are going to have 55,000 to 60,000 pound tractors pretty easily.”

He’s suggesting a 50 HP to 70 HP tractor becomes the default tractor size. Production efficiencies and labour savings help pay for the technology. Shearer is also exploring other efficiencies such as the mobility of a fleet of smaller autonomous tractors that could move across regions based on the different timings of cropping seasons.