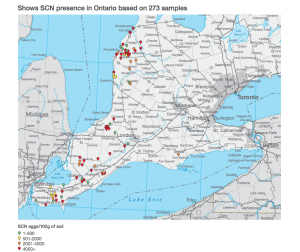 Soybean Cyst nematode (SCN) was first identified in Ontario in 1998. Since then the pest has slowly and methodically trekked across the province and can now be found in most parts of Ontario.

In this episode of Soybean School, Syngenta agronomist Shawn Brenneman and field biologist Marijke Van Andel discuss findings from a research survey they’ve just conducted that provides further insight into SCN’s Ontario travels. SCN yield losses in Ontario can range from 5% to 100% in fields where the pest is present.

Van Andel says the new survey is consistent with a 2014 Huron County survey that showed more than 50% of the soil samples tested positive for SCN. “I think that was a big shocker for the industry to see that in Huron County.”

The story is similar for the new Syngenta survey that tested 300 grower samples from fringe areas where SCN was previously identified, explains Brenneman. The results indicate that SCN continues to travel north along Lake Huron as far as Kincardine where samples have tested as high as 30,000 eggs per 100 grams of soil. “That’s unreal pressure that we wouldn’t expect to see up there,” notes Van Andel.

SCN travels anywhere soil moves – through erosion, water, equipment or even work boots. “It’s just a matter of time before we see it everywhere soybeans are grown,” says Van Andel. “We are moving a lot of equipment around and farms are getting larger…. Because of that the spread will continue and increase more rapidly.”

Growers can use agronomic best management practices and choose resistant varieties to help manage the yield-robbing pest, but Brenneman says the first and most important step is to diagnose whether SCN has a foothold in your field. During the season, he recommends growers use a hand-held magnifying lens to inspect for those “little white bumps on the roots” as they scout.

Brenneman notes that starting in March, Syngenta will be teaming up with its retail partners to make SCN testing equipment available at select local outlets. This will allow growers to bring in soil samples and have them analyzed on the spot to determine whether there is SCN in the soil.