The new federal government has made reducing national greenhouse gas emissions a priority, committing to the creation of a pan-Canadian framework for combatting climate change and to meeting emissions reduction targets. Details are thin, but climate change and the environment were mentioned numerous times in the ministerial mandate letters shared by the Trudeau government last week.

The prime minister plans to meet with provincial and territorial leaders in Ottawa on November 23 to discuss national climate change commitments before heading to Paris for the UN-organized climate change conference that begins November 30.

At the provincial level, Ontario intends to join the cap and trade system that Quebec is already part of in 2017. The Ontario government began a 30 day public comment period on the proposal on Monday. Several other provinces, including Alberta and BC, already have carbon taxes, although Alberta Premier Rachel Notley has said she will unveil planks of a new climate-change strategy before she heads to Paris. 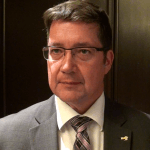 KAP president Dan Mazier says farmers should be paying attention to and participating in all these discussions, as he’s concerned about agriculture being viewed as an “energy-hungry” industry.

“We need a lot more study on just how much energy it does take and what is the net benefit or deficit that we’re using,” he says in the interview below. “There’s some opportunity there to step up and say ‘here’s what agriculture is doing.’ I think we’d all be surprised just how positive a balance we do contribute.”

“Transportation is the number one emitter (in Manitoba) and agriculture is number two. If you’re number two, I can’t help but think about how we’ll be viewed in the future,” he says.

Related: What does Ontario’s Commitment to Cap & Trade Mean for Agriculture? 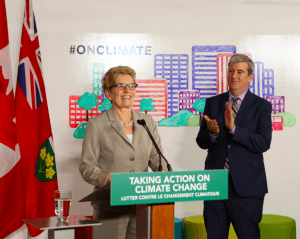 In Ontario, the Ontario Federation of Agriculture believes agriculture is a solution provider, as farms can be managed to achieve emissions reductions. No-till, manure and fertilizer management, cattle feeding efficiencies and other practices could provide carbon offsets, which when aggregated, can be sold to point source polluters, as they have been in Alberta. The OFA sees the carbon credit market as a potential revenue stream for Ontario farmers, as opposed to a cost.

While there are still many questions to be answered, the impact new climate change policies will have on farms depends on how they’re designed, which is why Mazier is hopeful after hearing new federal Agriculture Minister Lawrence MacAulay tell farm groups he wants to meet with and listen to them.

“Hopefully we don’t end up on the short end of the stick, but at least somewhere in the conversation,” he says.