In 2014 when RealAgriculture visited the World Dairy Expo in Madison, Wisconsin, there were smiles all around from US dairy farmers.

But one year later, US$25 per hundredweight milk prices are but a memory. 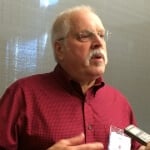 One of the possible remedies to low prices could be greater access to the Canadian market. If there’s truth to reports that a potential Trans-Pacific Partnership trade deal would open 10 per cent of the Canadian market to imports from TPP countries, US farmers might indeed crack a smile.

Wednesday at the World Dairy Expo, RealAgriculture’s Bernard Tobin caught up with Mark Stephenson, University of Wisconsin’s Director of Dairy Policy Analysis. Stephenson says there’s been a big push from the US administration and the country’s dairy farmers to gain access to the Canadian market. “We would like to see opportunities for trade anywhere we can and it’s always better with your near neighbours,” says Stevenson.

He notes that US farmers feel they should have pushed harder for access to the Canadian market during NAFTA negotiations more than 20 years ago. “There’s a feeling that in the past the US has given up too easily, especially on dairy trade.”

Stevenson adds that access to the Canadian market would be a significant opportunity for US farmers, but it wouldn’t sound the death knell for dairy farmers north of the border. He expects US milk “would certainly move across the border, but it won’t be a gusher.”