Every year the Canadian Farm Writers Federation (CFWF) hosts a conference and awards night, complete with agriculture and agri-food related tours. This year, for the first time, I was along for the ride.

I have to say, I wasn’t sure what to expect. I’ve met a great number of farm writers, journalists and reporters since the start of my gig with RealAgriculture, but it was usually under much different circumstances. Like, when we are all crammed in a ‘media scrum’ around an agriculture minister, or we’re rushing to submit updates from the corner of a conference room with a dodgy wifi signal. But, seeing my peers replace their fedoras with white cowboy hats was enlightening. Media people are people too.

When we applied to take part in the CFWF conference, we had the choice of many tours, starting Thursday. Unfortunately, I gave up my seat on any of the Thursday buses for the opportunity to work, but I did have a blast on the Friday, North Tour, which toured CL Ranches, Rocky Mountain Holsteins, the Canadian Beef Centre of Excellence and the University of Calgary’s Faculty of Veterinary Medicine.

Our tour’s first stop was at CL Ranch, where we met CEO Cherie Copithorne-Barnes. She gave us a brief history of the ranch, which was established by the Copithorne family in the late 1800s. The area somehow reminded them, she laughed, of Ireland.

The ranch, once nestled on the banks of the Jumping Pound Creek, now owns, leases and rents over 20000 acres of land, working closely with their neighbours, the Stoney and Tsuu T’ina Nations. They also manage a western movie set (as you do), which has seen the filming of parts of Hell on Wheels, Shanghai Nights, Diablo and more. 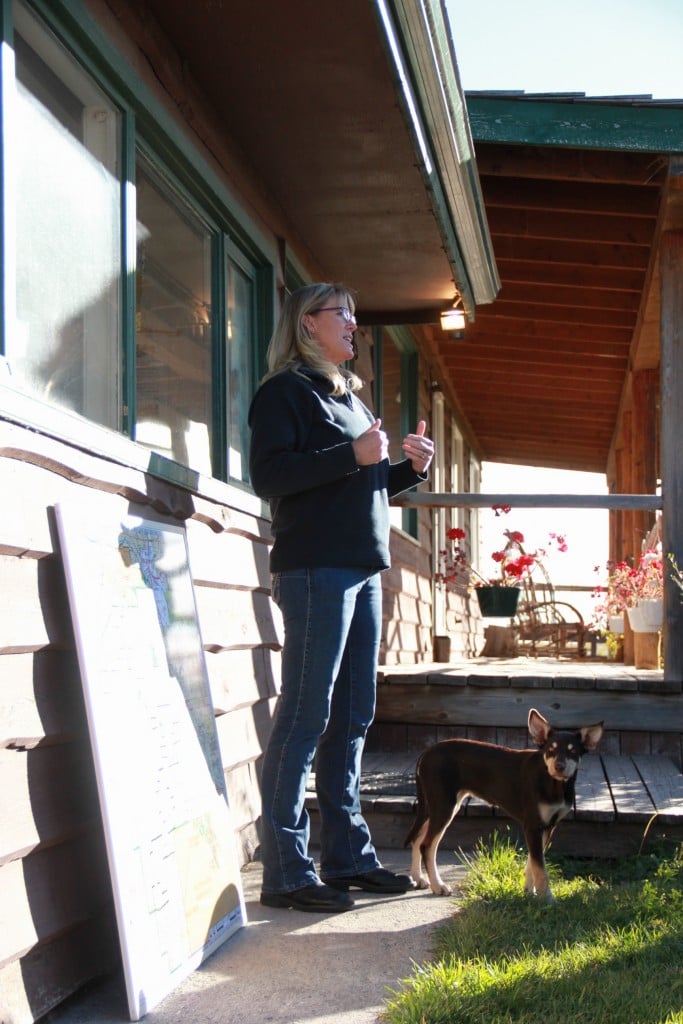 Cherie Copithorne-Barnes, CEO of CL Ranch and Chair of the Canadian Roundtable for Sustainable Beef, says the most significant sustainability challenge for her community is encouraging youth to be involved.

A CL Ranch dog. Mostly being adorable, but also roosting next to a map outlining the CL Ranch and its partners. 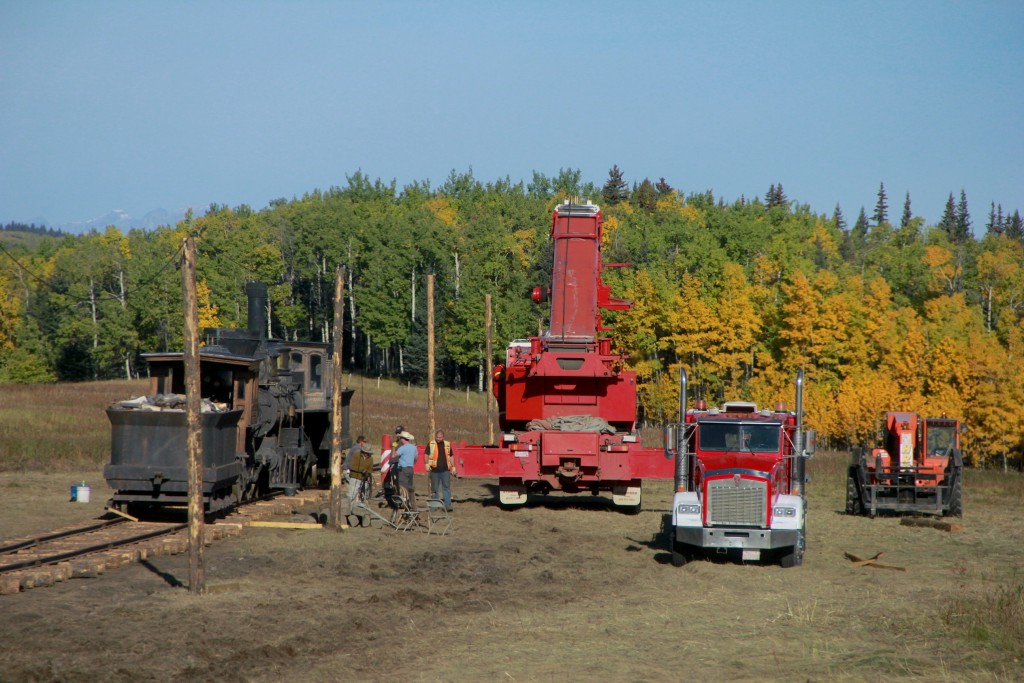 Filming was in intermission while we toured the ranch, so we were able to see the sets from a distance. “This business is booming right now,” Cherie Copithorne-Barnes told us, crediting a weak Canadian dollar and changes in the tax structure.

Our second stop was Rocky Mountain Holsteins, owned by David Chalack and Glen Hockley, and managed by Ron Churchill. Unlike most dairy operations, this one receives the majority of its income not from milk, but from genetics. At their most recent sale, 104 animals sold for an average of $9000, with one cow selling for $197000. Their biggest challenge is finding labour. 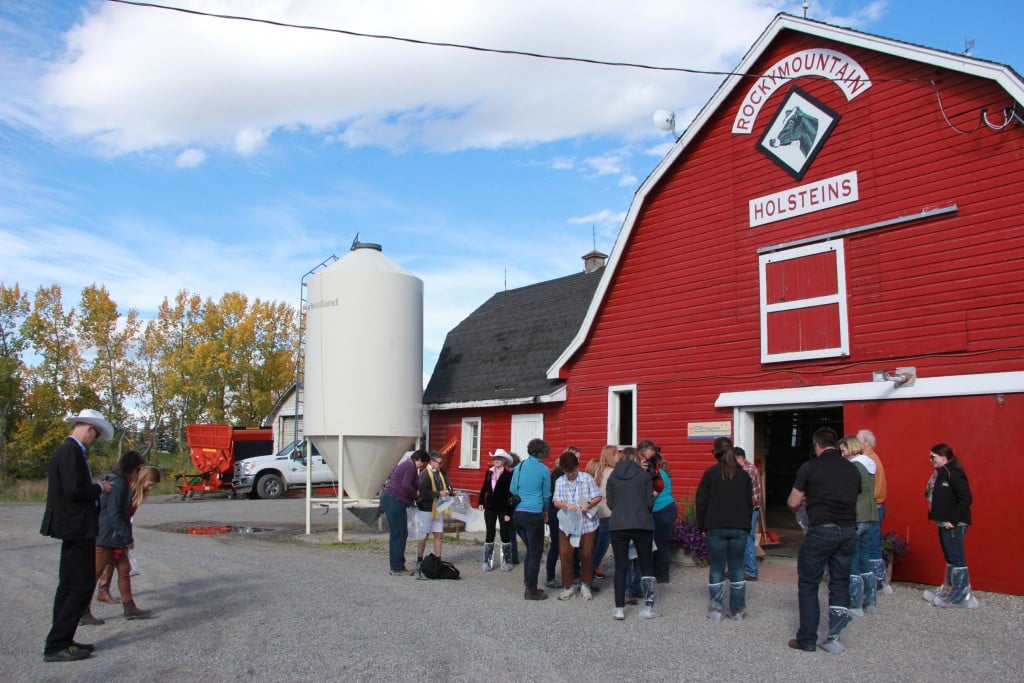 The CFWF North Tour group in front of the main barn, which, at over 70 years old, doesn’t really show its age. 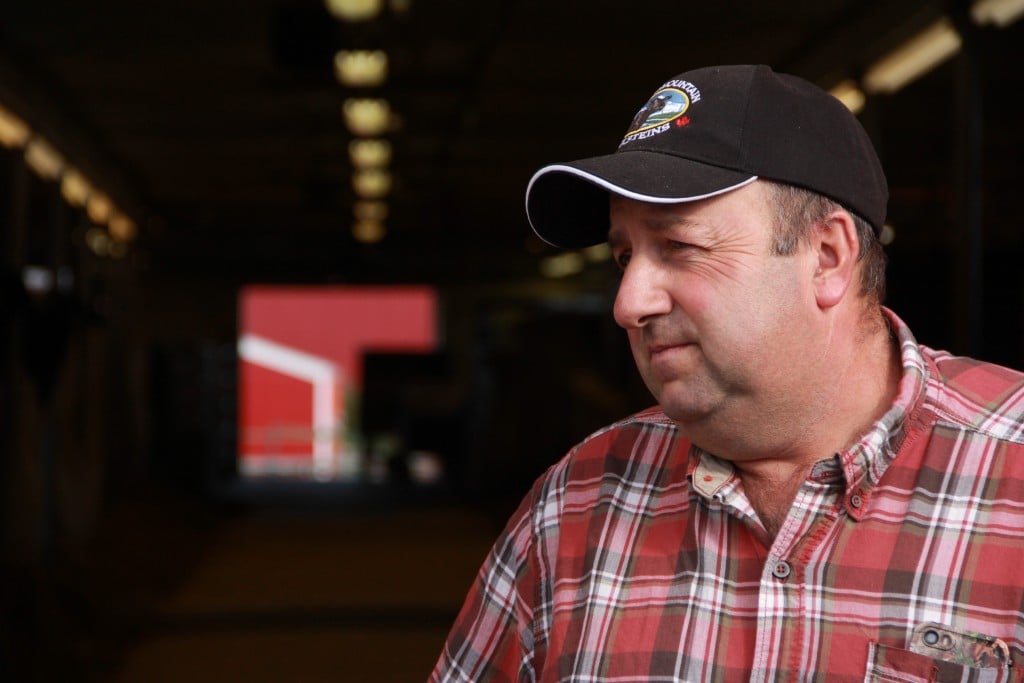 Ron Churchill manages the Rocky Mountain Holstein herd. They buy all their feed. “Our main objective here is the animals,” he told us. 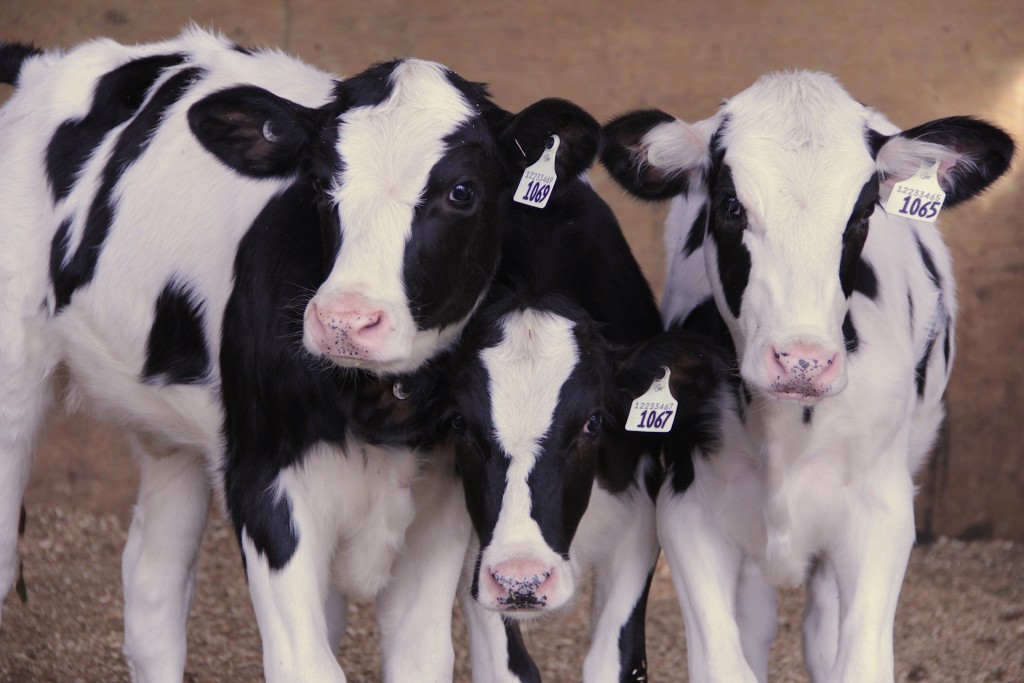 If you lose a calf, says Churchill, you’re losing upwards of $6000, and that’s not including genetic value. It’s important to take good care of the animals.

The Canadian Beef Centre of Excellence officially opened its doors in March, and was our third stop on the tour. The facility was developed to promote beef through training and education. The Centre is complete with a boardroom, commercial kitchen, consumer demonstration/test kitchen, a demonstration theatre and beef fabrication room. 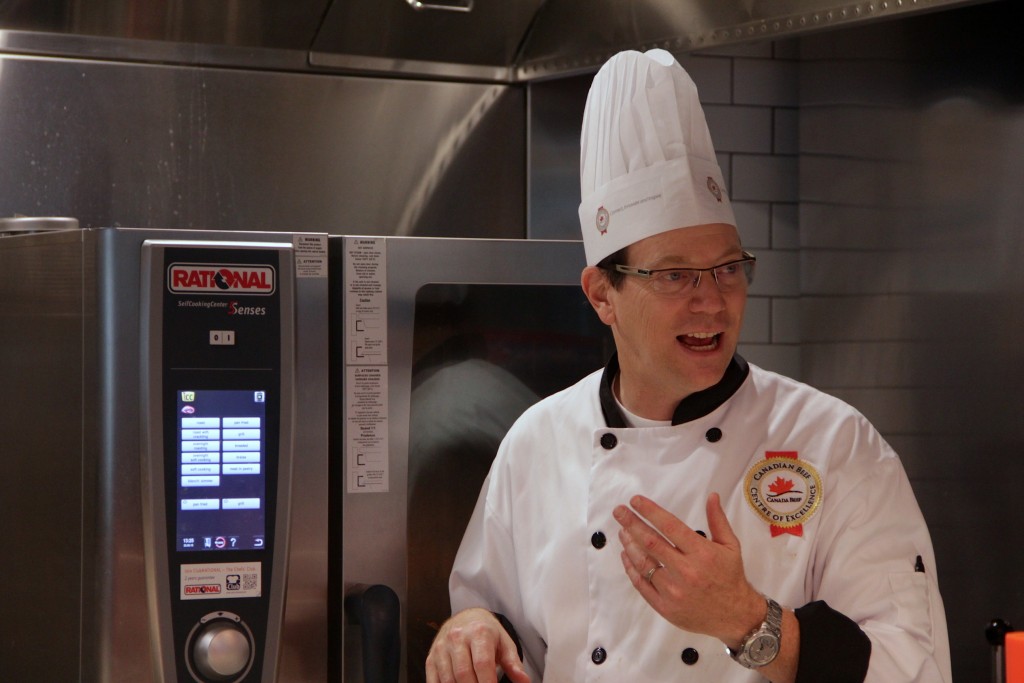 Marty Carpenter, centre director, showed us around the kitchen, which boasts Rational and Garland products, including a one-of-a-kind induction brazing unit. 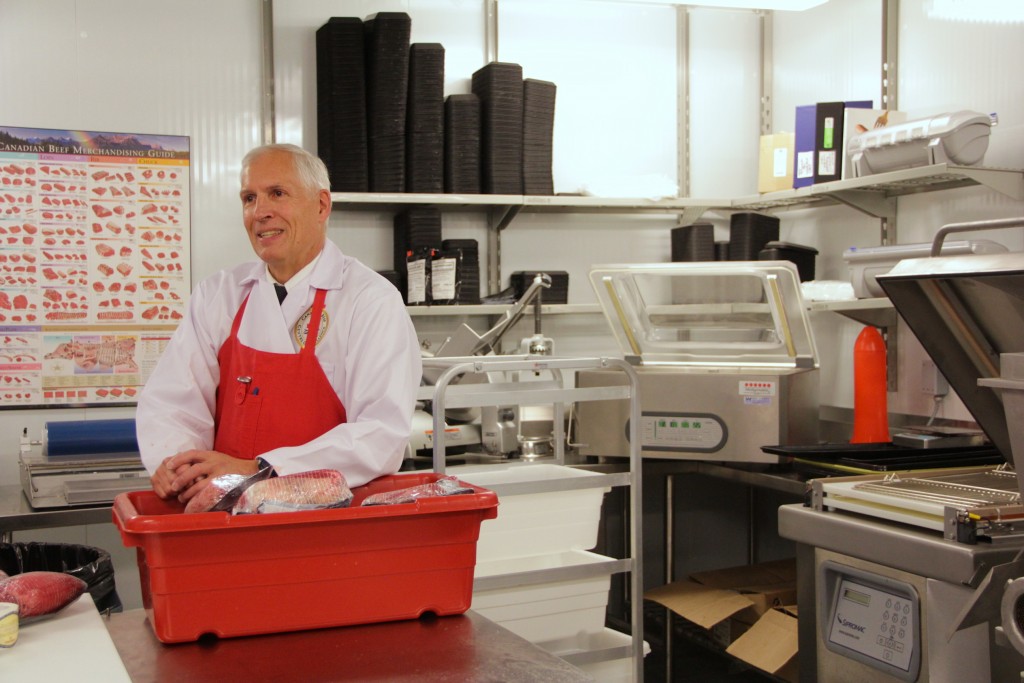 Abe man Velle, centre technical manager, says the beef industry has a wonderful product, but too much is being wasted or under-utilized.

At our final stop before supper, we met Alastair Cribb, Dean of the Faculty of Veterinary Medicine. 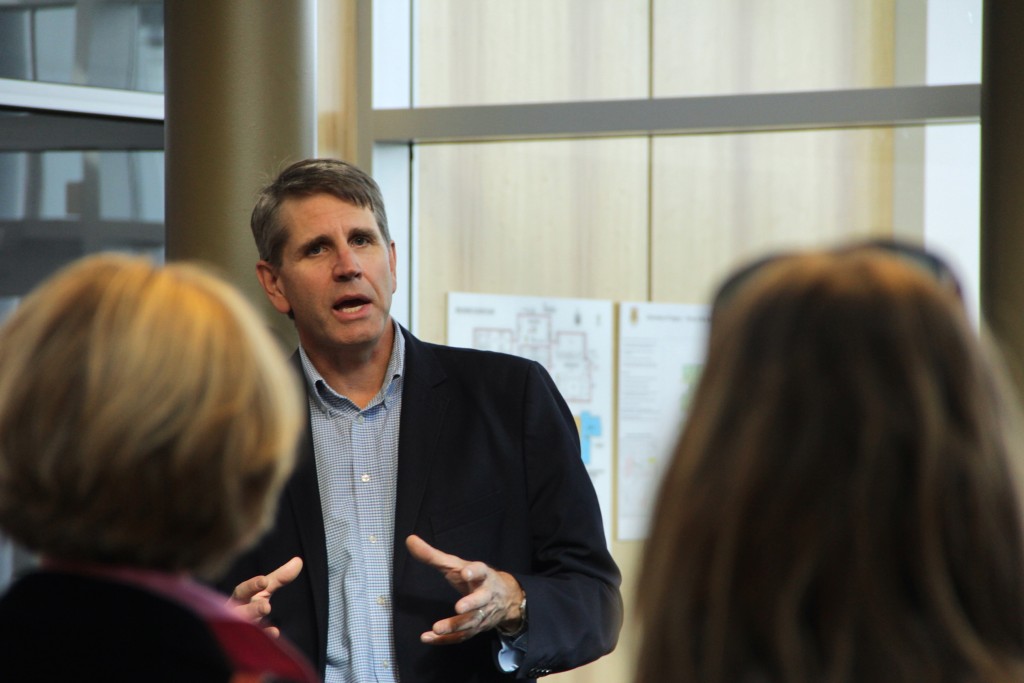 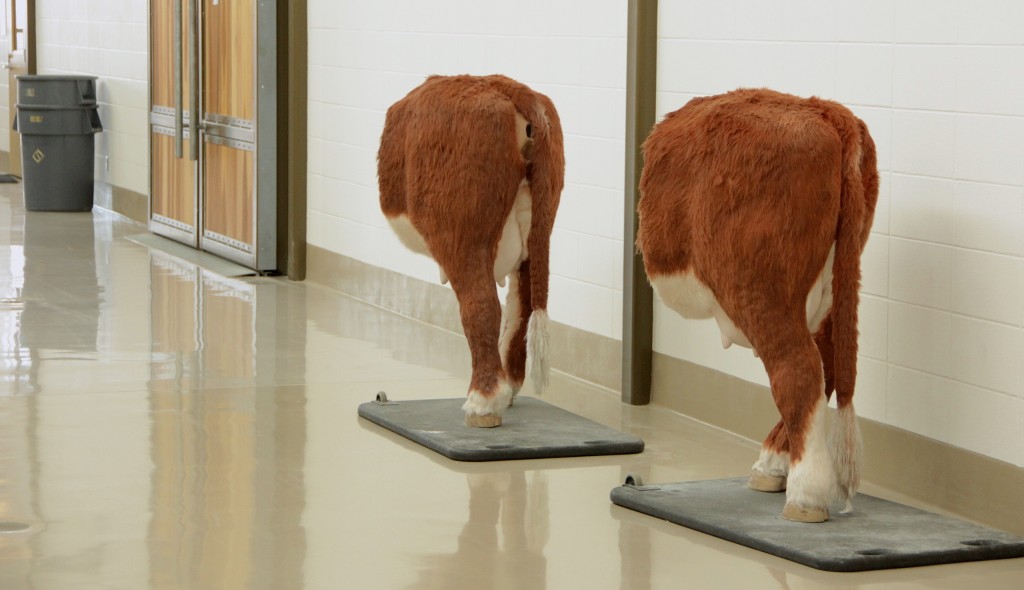 Teaching materials include animal models with removable backs, velcro stitches and, in some cases, no front halves.

For the rest of the evening, we headed to Fort Calgary, where we tried on RCMP uniforms, found ourselves in jail, ate cheese and read a synopsis of the history of the facilities. The next day we were indoors, talking about the urban/rural divide. Stay tuned for posts inspired by those presentations. 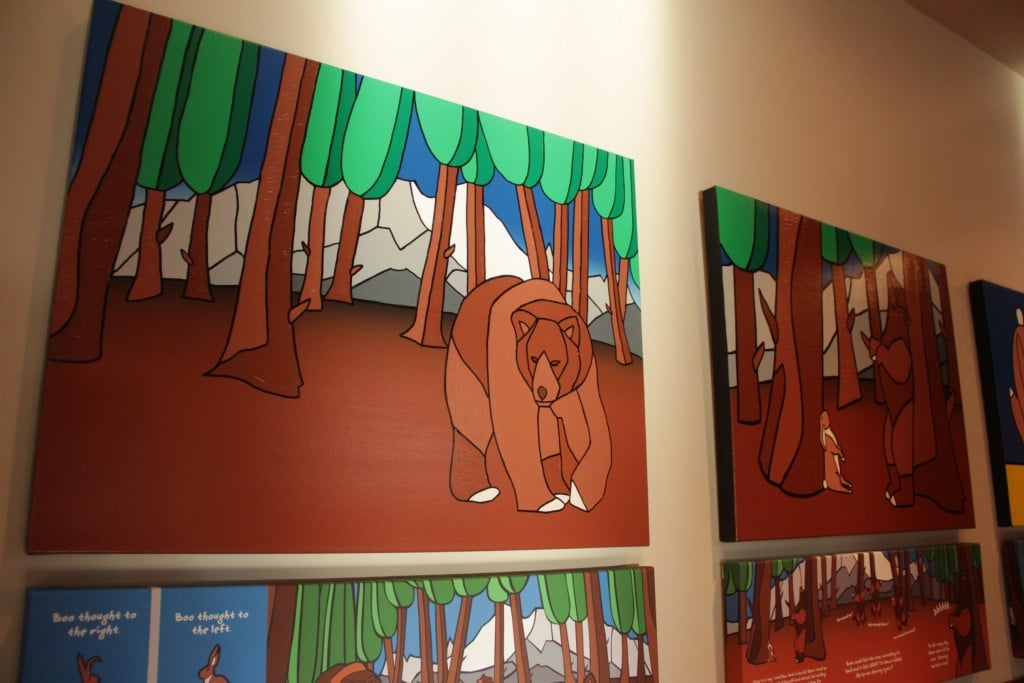 The Canadian Farm Writers Federation was founded in 1955, and offers agriculture communicators a chance to connect through networking, career opportunities, professional development and awards competitions.

You can find more of our photos of the tour on our Facebook page.