Soybeans are serious consumers of phosphorus, so it seems logical that supplying P fertilizer would be important for maximizing soybean yields, right?

That’s wrong, at least in the short-term, according to research results in southern Manitoba.

Researchers from the University of Manitoba and Manitoba Agriculture are comparing how soybeans respond to three rates of P2O5 fertilizer (20, 40 and 80 pounds) applied three different ways (broadcast, seed-placed and side-banded.)

“We haven’t seen any response to phosphorus fertilizer,” explains Gustavo Bardella, a grad student at the U of M, in this Soybean School episode filmed at the Manitoba Pulse & Soybean Growers recent SMART field day. Bardella, who hails from Brazil, is leading the soybean and phosphorus management study in Manitoba.

“In sites with soil tests as low as 3 ppm Olson P, the control plot where we didn’t apply any phosphorus had a very good yield, as high as the other plots where we applied some fertilizer,” says Bardella. 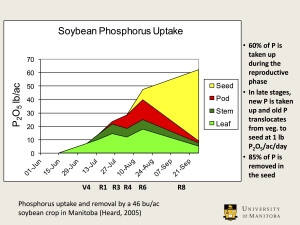 And yet, soybeans are known to be heavy phosphorus users, he explains, removing almost a pound of phosphate from the soil per bushel (>0.85lb P2O5/bu).

So where do soybeans find the phosphorus they need, especially during the later reproductive stages (as shown in graph)?

They are efficient phosphorus scavengers, explains Bardella, converting phosphorus in the soil to a usable form, particularly during the crop’s reproductive stages when nitrogen fixation peaks: “The plant starts releasing protons and those protons can release the phosphorus absorbed in the soil, and we have lots of those types of phosphorus here. That’s how (the plants) get phosphorus that’s not showing up in soil tests,” he says, noting there’s also some P made accessible through the soybeans’ association with mycorrhizae in the soil.

So even if they don’t respond to P, should phosphorus fertilizer still be applied with soybeans? With soybean acres expanding in Western Canada, phosphorus levels in the soil are slowly being depleted. What’s the best way to maintain soil P levels? Check out the link below and stay tuned for an upcoming Soybean School episode with the University of Manitoba’s Dr. Don Flaten on phosphorus management strategies in a rotation with soybeans.