A ranching family from southern British Columbia has been chosen as the 2015 recipient of the “The Environmental Stewardship Award” from the Canadian Cattlemen’s Association.

Darrell and Doris Squair, along with their son Travis and daughter-in-law Katie, operate Squaw Valley Ranch near Lumby.

They received the TESA recognition at the CCA’s Semi-Annual Meeting in Winnipeg on Wednesday. 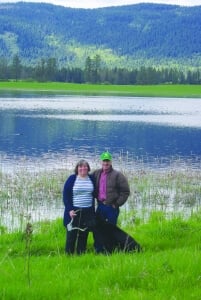 “We’re very honoured to be chosen for this award. We would like to thank everyone and especially the other provincial TESA nominees for their continued work towards environmental stewardship,” said Darrell.

The Squairs were recognized in part for their commitment to having their cattle co-exist with wildlife, including grizzlies.The ranch has grown from the original 320 acre, 60 head operation, but they maintain a no-hunting policy and say predator issues remain non-existent.

A custom-designed hydro-electric dam built in 1989 continues to provide electricity to the ranch and they were among the first farms in the area to complete an Environmental Farm Plan.

The TESA award has been handed out annually since 1996. Each provincial cattle organization recognizes a farm or ranch and nominates them for national recognition.

Related: New Foundation Allows Opportunity to Give Back to the Cattle Industry