Winnipeg-based Canterra Seeds and Limagrain were in Saskatoon, Sask., Thursday to announce the establishment of a new cereal breeding and development partnership, Limagrain Cereals Research Canada. The joint venture will be located in Saskatoon. 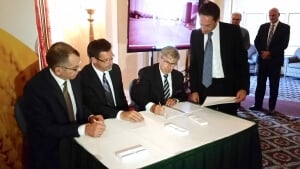 Based in France, Limagrain is a farmer-owned cooperative, and the fourth largest seed company in the world.

Recognizing Saskatoon as a crop development hub for Western Canada, Limagrain’s Bruno Carette says the company is “… proud to bring our cereal breeding expertise to Saskatoon… and work collaboratively to breed advanced wheat genetics for farmers in Western Canada.”

This joint venture was made possible with the passing of Bill C-18, which amended Canada’s Plant Breeders’ Rights Act making Canada compliant with 1991 International Convention for the Protection of New Varieties of Plants (UPOV ’91), notes David Hansen, president and CEO of Canterra Seeds.

“There is no understating the importance of this deal to Canadian agriculture. Modernizing our Plant Breeders’ Rights Act has opened up a whole new world of wheat. Our farmers can now buy and grow varieties that they couldn’t access before. For us as seed marketers, this is obviously an opportunity, but the opportunities are much greater for our customers, the producers,” he notes. (continued)

In addition to this announced joint venture, Limagrain and Canterra Seeds also announced a “strengthened” partnership to enhance the distribution of cereals in Western Canada, which involves Limagrain acquiring a 30 percent equity stake in Canterra Seeds (HOLDINGS). Limagrain will now have the right to appoint representatives to the board of directors of Canterra. Seed grower and retail members in Canterra will collectively still hold a more than 40 percent ownership share, with Ceres Global Ag Corp owning a 17 percent stake.

Completion of these transactions is subject to a number of conditions, including ongoing due diligence and the requirement that there be no changes to Bill C-18. It is expected that the transactions will be complete by the end of September.