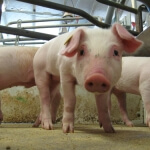 The hog manure surplus in southeast Manitoba is forcing the swine industry and government to look at alternatives for redistributing manure to areas that don’t have excess phosphorous levels in the soil. That includes an option that’s likely unprecedented in scope: a 35 mile long underground hog manure pipeline.

“We’re turning over every stone in terms of trying to help producers in southeast Manitoba understand their options,” explains John Carney, executive director of the Manitoba Livestock Manure Management Initiative, as he describes the results of a feasibility study looking at moving hog slurry via pipeline in the interview below.

The preliminary estimated cost of a 14 inch pipeline, with pump facilities and storage at both ends, would be around $42 million, according to DGH Engineering, the firm commissioned to conduct the study. On a 25 year mortgage, DGH figured the unit cost be around 7 cents per gallon, with that cost dropping to 2 cents per gallon after the mortgage is paid off.

“It’s an idea that’s been bandied around for some time. What we wanted to do was help the industry and stakeholders by putting some facts around this idea,” explains Carney.

There are existing manure pipelines in use in North America, although not to this scale. In 2006, researchers at the University of Alberta examined the concept for transporting cattle manure diluted with water to a central anaerobic digester (read their paper here).

On top of the dollar figure, Carney notes a manure pipeline would have to go through a stringent regulatory and environmental approval process.

“We would not underestimate that side of things. There’s really the financial implications, there’s the regulatory side and there are also the social concerns — being a good neighbour,” he says.

A pipeline is just one of many phosphorus management alternatives MLMMI is researching, including trucking, anaerobic digestion, separators, and optimizing the use of multi-cell lagoons to concentrate solids and phosphorus.

Read the manure pipeline study on MLMMI’s website here, as well as a coinciding study on the cost of trucking manure here.