Jeff and Ebony Prosko of Rose Valley were named Saskatchewan’s Outstanding Young Farmers for 2015 during the OYF luncheon at Canada’s Farm Progress Show in Regina on Friday. 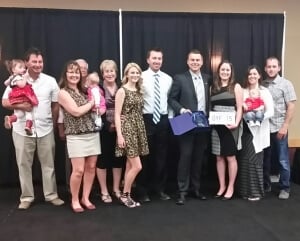 They operate a 4,500 acre grain and oilseed farm — part of a larger 15,000 acre family operation in northeast Saskatchewan. The Proskos also opened an ag retail business at Rose Valley called ProSoils in 2014.

Together with their two young daughters, they will represent Saskatchewan in the National Outstanding Young Farmers program in Edmonton in late November.

After receiving the honour, they took some time to chat about their farm, how they determine roles in their business, the OYF program and more: