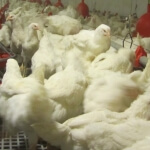 It is hoped that trading partners who recognize control zones will now resume trade with B.C. Those who have placed nationwide restrictions on trade, however, will likely continue to wait until after Ontario has declared the same.

The highly pathogenic H5N2 strain was also found in three Ontario poultry flocks this spring. The third case was discovered on April 23rd and confirmed as the H5N2 strain the following day. The Canadian Food Inspection Agency has not reported any new cases since then.