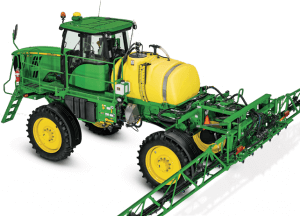 “With ever increasing demands on producers and service providers to cover fields quickly during short application windows, the R4023 Sprayer was designed to provide improved ride quality, operator comfort and productivity across a wide variety of field conditions and cropping systems,” said Dave Mulder, product line manager for John Deere application equipment, in a release.

Enter to win a trip for 4 to the NASCAR race in Phoenix this fall!

In this episode of the TechTour, filmed at the National Farm Machinery Show, RealAgriculture’s Shaun Haney talks to Mulder about the new R4023 sprayer. The duo focus on the machine’s efficiency, discussing its potential role on an operation, and some of the aforementioned features.

Never miss a post from Real Agriculture — join our community!