Farmers from across southern Ontario rallied at two MPP offices today, May 29, to demonstrate their frustration over the Ontario government’s handling of impending regulations regarding the use of neonicotinoid treated corn and soybean seed.

Grain Farmers of Ontario put the call out earlier this week for farmers to show up between 10 am and 1 pm, Friday, May 29, at the offices of  Jeff Leal, minister of agriculture, and Deb Matthews, deputy premier. 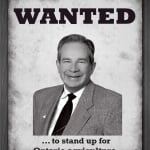 Grain Farmers of Ontario circulated these flyers to attendees at a rally protesting impending neonic regulations, imposed by the Ontario government.

“We have been extremely disappointed with how Toronto-driven Ontario’s agricultural agenda has become. Our Minister of Agriculture appears to be taking his marching orders from the Minister of Environment, while Liberal MPPs in ridings where agriculture matters are just sitting on their hands while we get unfairly targeted here,” said Mark Brock, Chair of Grain Farmers of Ontario.

Grain Farmers of Ontario wants the province to work with them to address concerns with the government’s approach to restricting the use of neonicotinoid seed treatments in a manner that will benefit pollinators without devastating agriculture — a balance the federal government has attempted to understand and the province has ignored completely, says GFO.

“The government has put us on a path where we are forced to fight for the life of farming here in Ontario. This issue is only going to get bigger, more divisive, and further compromise this government’s ability to claim any legitimacy in making decisions that impact Ontario’s rural way of life,” said Brock. The rallies were well attended, say organizers, with many farmers taking to social media using the hashtags #onpoli and #ontag, #neonics. Minister Leal was not at his office during the rally. GFO’s Brock did go in to speak with the Deputy Premier, but she did not come out to speak with the crowd. Hear how it went in the audio above.

Very disappointed that our own Minister of Agriculture @JeffLeal_MPP didn’t show up to talk to us this morning. pic.twitter.com/2XvoHKVeN8