There’s no question the Canadian Wheat Board is establishing its physical presence in Western Canada, but farmers are still seeking answers to questions about how they will participate in owning the grain business controlled by G3 Global Grain Group — a joint venture between Bunge and a Saudi government investment company. 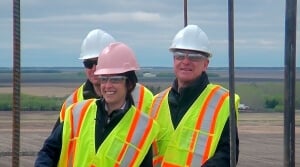 A farmer equity trust will own 49.9 percent of CWB, with G3 retaining an option of buying out the trust after seven years. So what happens if farmers want to retain ownership after that? What are farmers’ options for liquidating their equity? Can it be sold or traded? These are all issues that need clarifying. As CWB’s chief strategy officer Dayna Spiring explains in the video below, some of the answers will only be determined by the trustees after this trust is established.

When it comes to infrastructure, construction of four new grain elevators in Manitoba and Saskatchewan is well underway. Work on the first two — at Bloom, Man. and Colonsay, Sask. — is nearly complete, while the concrete for the third elevator, at Glenlea, Man., was poured last week. The main concrete structure for the fourth, at Pasqua, Sask., is scheduled to be poured in a few weeks. CWB isn’t planning to stop at four — CEO Ian White notes they plan to announce and build additional grain handling facilities.

RealAgriculture was invited to tour the construction site at Glenlea during the final stages of the concrete slip pour (watch for an upcoming video on how concrete elevators are made).

Following the tour, White and Spiring discussed the construction of the new elevators, future infrastructure plans, and some of the details about the farmer equity program: