Another gene that has provided resistance to crown rust in oat varieties grown in Western Canada is losing its effectiveness.

The Pc91 gene was a source of resistance to crown rust in some of common varieties in recent years, including Souris, Stainless, HiFi, AAC Justice and CDC Morrison, but changes in the crown rust pathogen population in Manitoba have resulted in these varieties becoming infected. 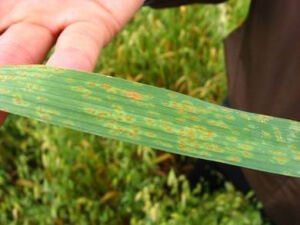 As Holly Derksen, plant pathologist with Manitoba Agriculture, explains in the video below, the breakdown of genetic resistance could result in changes to the province’s “resistant” rust disease rating for varieties that depend on the Pc91 gene. With resistance also being lost in the U.S., some states have already revised the ratings in their variety guides.

Breeding resistant varieties is an ongoing challenge, as selection pressure helps the crown rust population overcome resistant genes. Older oat varieties grown on the prairies used to rely on the Pc68 gene, however an outbreak of oat rust in 2005 proved it was no longer effective.

The primary source of crown rust infection is through spores that blow north from the U.S (check out the USDA’s Cereal Rust Bulletins here). Disease severity can vary depending on when the first inoculum arrives in Western Canada. However, as Derksen notes, crown rust spores can also overwinter in Manitoba. Buckthorn, which is found near rivers, can serve as an alternative host.

AAFC and MAFRD will be conducting testing this summer to determine whether ratings need to be updated in Manitoba’s seed guide.