We’re about to flip the calendar to May, and, perhaps surprisingly, soil moisture is becoming a bit of an issue for those rolling in the fields, says Peter Johnson, in this week’s Wheat Pete’s Word. 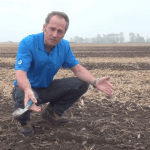 What can you do about soil that’s drying out too quickly? Well, you’re doing to have to adjust planting depth for one thing, says Johnson, especially with soybeans, and hope that you don’t end up having to go too far to reach it. On the plus side, he explains in the audio below, farmers are reporting that the soil is fit and just like a garden in some areas. Johnson adds that those worried about dry soil may want to double cultivate or pull a packer to help minimize dry-out.

Moving on to wheat, we’re talking prices. Have you checked out the soft white winter basis lately? Johnson laments that this kind of market signal — $2.50/bu! — would have been nice to see in the fall when farmers were choosing seed, but what this tells you is that if you’ve got soft white in the ground and it looks sketchy, the market is signalling you to keep it going!

How might you do that? Well, regardless of the type of wheat in the ground, it’s likely time for a shot of Vitamin N — unless you were in the crop two weeks ago putting down 60 to 80 lb/acre. For anyone who was earlier and just put down the 30 pounds recommended, it’s time for more nitrogen.

Story continues below the audio player…

For those of you putting in spring cereals (hello, straw!), it’s evident that starter phosphorus fertilizer is a must. Johnson says some spring crops are ending up purple they’re so deficient, so it’s a good reminder to put that P and maybe K down at planting.

As for wheat stand evaluations — remember to look across the rows when gauging green and blank spots, as looking down the rows can be deceiving. Interestingly, both low and high spots are showing drown-out. How can that be? As Johnson explains, eroded knolls often have poor soil structure leading to poor drainage. So even though they are higher, the wheat still effectively drowns.

The final two topics in this week’s Word are on weeds and virgin soybean ground: if you didn’t burn-off ahead of the wheat crop or do any control of winter annuals in the fall, now is the time to target those weeds, however it’s too early to go after spring flushing weeds, so hold tight.

For those of you with virgin soybean ground (that’s quite a feat!), Johnson closes out this week’s Word with a reminder to double inoculate. If you’re using pre-inoculated seed that’s great, but you have to add some other source of inoculant at the full rate. He adds that Horst Bohner, OMAFRA soybean specialist, also adds that starter N on virgin ground may be a sound risk management plan, but won’t replace inoculating.