Update on July 31, 2015: G3 Global Grain Group today announced the successful close of its deal to acquire a majority stake in CWB. CWB will be combined with the grain assets of Bunge Canada to form G3 Canada Limited.

Ian White, CWB President and CEO, said he is “gratified” with the outcome of the CWB privatization process: “CWB is pleased to complete the initiative to commercialize. The capital investment G3 brings, as well as extensive operational experience, is a huge benefit to the sector, and we are pleased that Canadian grain producers will be able to continue to participate in the growth of the new company.”

The remaining 49.9% will be allocated to a Farmers Trust and administered through the Farmer Equity Plan announced by CWB in 2013. The goal is to close the transaction by July, 2015. Karl Gerrand, formerly of Can-Oat Milling and Viterra, has resigned from Bunge Canada to become the CEO for G3.

The Farmer Equity Plan, established in 2013 and remaining in place going forward, “ensures farmers will have an ownership stake, at no cost to them, in CWB,” says the company. The equity plan works like this: when farmers deliver grain to CWB they are allotted $5 per tonne in equity in CWB. That equity will remain in CWB for a period of time to allow the equity to continue to be used in the growth and operations of the business, says CWB.

After seven years, G3 has the option of buying out the farmer trust, although some of the details about the valuation process and liquidation of equity have yet to be clarified.

“Farmers will continue to receive units until all the equity is allocated,” explained Dayna Spiring, chief strategy officer and general council for CWB during the announcement on Wednesday. “Ultimately it may be bought by G3 seven years from now or it may continue to grow with the company and farmers will be eligible for dividends and all the benefits of ownerships.”

“Today is the first day farmers get the opportunity to own half of the CWB. Up until today farmers had no ownership interest in the CWB. It was farmer-controlled, not farmer-owned,” said Spiring. 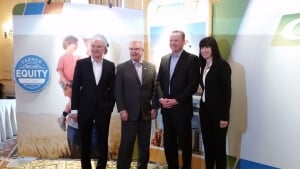 CWB will continue to be headquartered at Winnipeg. Ian White will continue with CWB until closing and for a period of time thereafter to ensure a successful transition period, says CWB. CWB’s Board has not yet been confirmed but will consist of seven directors including a representative of the Farmers Trust.

“G3’s significant investment in CWB together with the Farmer Equity Plan will create a major new competitor by facilitating the continued expansion of our grain handling network,” says CWB President and CEO Ian White. “Creating value for farmers will continue to be at the core of CWB and this plan offers them a unique opportunity to have equity, at no cost to them, in an international grain company.” 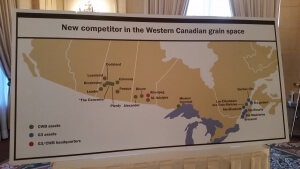 The grain company evolving from the former Canadian Wheat Board has invested heavily in grain handling infrastructure in preparation of becoming a private company. New CWB elevators are being built at Colonsay and Pasqua, Sask., and Bloom and Glenlea, MB. CWB has also acquired several existing elevators through the acquisition of Prairie West Terminal and Great Sandhills Terminal and invested in port capacity in Thunder Bay. G3 owns and operates several terminals along the St. Lawrence shipping corridor.

There have been some questions raised about selling the former Canadian Wheat Board to an entity controlled by foreign interests.