Weekly grain shipping requirements for CN and CP Rail came to an end on March 28th, as the federal government decided it would not renew the Order-in-Council mandating the railways ship a minimum amount of grain each week. 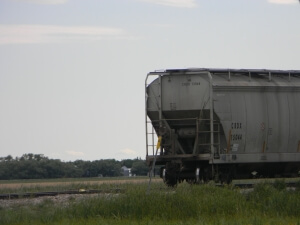 The minimums were implemented in the spring of 2014 to address the backlog of grain across Western Canada. The weekly requirements were renewed, and also reduced, in November.

“I am pleased that the government’s action requiring minimum volumes had its intended effect and that the movement of grain by rail is once again running at a rate that contributes to strong economic growth,” said Transport Minister Lisa Raitt on Saturday.

The volume requirements had some unintended consequences, including hampering producer car availability and the movement of grain south into the U.S., as the railways gave priority to quick, high-volume routes to the West Coast. The impact was especially evident in the oat market last year, as the majority of Canadian oats are shipped into the U.S., usually by rail.

So will the end of the weekly minimums have a noticeable effect? Where will the impact be felt?

“In the short-term there is not likely to be an impact on the removal of the weekly minimums. The most recent thresholds were set very low, and my understanding is that the railways were exceeding them already,” said Wade Sobkowich, executive director of the Western Grain Elevator Association in an email to RealAgriculture.com on Monday. “Provided the railways continue to operate the way they have been, we would presumably receive the same level of service we’ve received prior to the ending of the weekly minimums.”

Lorne Boundy, an oat and wheat trader with Paterson Grain in Winnipeg, echoed some of Sobkowich’s sentiment.

“There will maybe be a minor impact on oat movement into the U.S., but since the levels were decreased in November, we’ve actually seen a very good oat export pace,” he says. “We’re actually about 13 percent higher year-to-date versus last year when the mandate to haul minimums really affected oats.”

As part of this interview, Boundy discusses whether the end of the weekly grain shipping minimums will have a noticeable effect in the oat market, the possibility of tight oat stocks in Western Canada and what to look for in Tuesday’s USDA reports: