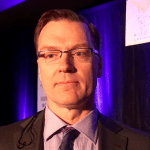 Brian Conn, the new chair of the Canola Council of Canada

The Canola Council of Canada has new chair.

“On behalf of the board, I would like to thank Terry for his service as Chairman,” said Conn in a CCC news release. “Terry played a key role in the development and launch of our new 2025 strategy, and I look forward to continuing to work with the board to achieve these goals through partnership and innovation.”

Three new directors were also named to the CCC board:

The council’s new board was announced at its annual meeting in Banff on Thursday.

2015/16 Canola Council of Canada Board of Directors: