There are signs the long-running dispute over U.S. mandatory country of origin labelling (COOL) rules for meat is moving closer to resolution, as a Canadian delegation led by Agriculture Minister Gerry Ritz visited Washington, DC. this week.

“COOL is on life support,” Ritz told reporters on a conference call on Thursday afternoon. 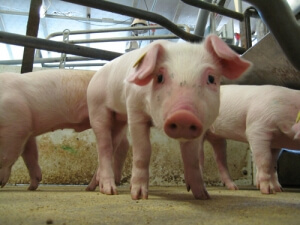 In what was the latest of many trips to discuss COOL on Capitol Hill, the Canadians met with U.S. House and Senate members, as well as American livestock and meat industry groups who are pushing for amendments that would eliminate the need to segregate cattle and pigs coming from Canada and Mexico.

“The vast majority of people we’ve talked to recognize that this needs to be amended,” said Andrew Dickson, general manager of the Manitoba Pork Council, shortly after his flight from Washington arrived back in Winnipeg on Thursday. “Our feeling is if everything goes right, we should have this resolved by the end of the year.”

Ritz reiterated Canada’s willingness to implement retaliatory tariffs if the U.S. loses its final appeal at the World Trade Organization, which will be heard February 16th and 17th.

“I think most people are aware there’s a real possibility the U.S. will lose its appeal,” said Dickson, who will be part of the Canadian industry group at the WTO hearing in Geneva. “That report will come out in May, hopefully, if not earlier. If the U.S. has lost, Canada and Mexico will be in a position to ask for authority to apply retaliatory measures against products from the United States. This has created quite a lot of consternation in certain circles.”

RealAg’s Kelvin Heppner caught up with Andrew Dickson at the Manitoba Swine Seminar on Thursday and talked about the latest meetings in Washington and the U.S. government’s options for amending COOL: