Canadian rail companies’ concerns that legislation passed by the federal government in 2014 would open the Western Canadian grain market to “poaching” by U.S. railways appear to be unfounded so far, much to the dismay of farmers and farm organizations hoping for increased competition for Canadian National and Canadian Pacific railways.

With the passage of the “Fair Rail for Grain Farmers Act” last spring, Ottawa increased interswitching distances — the length one rail company can pull grain from an elevator on another rail company line — from 30 kilometres to 160 kilometres, giving several dozen Canadian elevators access to shipping services from Texas-based BNSF Railway. CN CEO Claude Mongeau told a Winnipeg business audience in the spring of 2014 that these changes would allow American railways to “poach” Canadian grain and jobs. 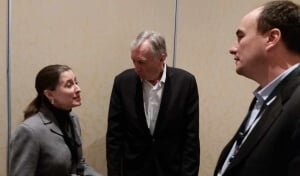 However, a spokesperson for BNSF told producers at the Western Canadian Wheat Growers convention in Winnipeg on Friday that Canadian grain is currently not a high priority for the company.

“We need to get our own house in order,” said Barb Haertling, BNSF’s general director for agricultural products. “We’re aware of it (the interswitching changes), but we have no plans at the time. We have a lot of things we really need to focus on in the United States…right now we’re still running about an 8,000 car backlog and we need to get that taken care of.”

She said the Canadian government did not consult with BNSF before extending the interswitching distances.

Haertling also noted the Canadian grain industry has a looming problem with an aging hopper car fleet, and suggested that the volume-based revenue cap for Canadian grain is deterring investment in upgrades.

While the Canadian rail sector is heavily regulated, she told the audience the U.S. grain trade appreciates the open market approach to car supply.

BNSF may not be looking at the changes to interswitching for more Canadian grain, but the company is expanding its presence in southeast Saskatchewan. Ceres Global Ag Corp announced Monday that the first BNSF hopper cars have arrived at the company’s new commodity logistics hub at Northgate, Saskatchewan, following the installation of the U.S. Customs trailer at the temporary grain loading site in late December. Ceres is currently constructing a 2.2 million bushel elevator that will be capable of loading a 120-car trains. It’s supposed to be operational by October 2015 and completed in March 2016.