It’s rare to find a western Canadian farmer who doesn’t have a tale to tell of the roaring comebacks canola has made in a growing season. Sure, there have been some wrecks — wicked windstorms that flip swaths or hail that leaves nothing but sticks — but the “Cinderella crop” (you’ve heard the song, right?) has become a staple of western Canadian rotations for very good reason: the crop is resilient and consistently performs well.

And, perhaps, canola is falling victim to its own success. 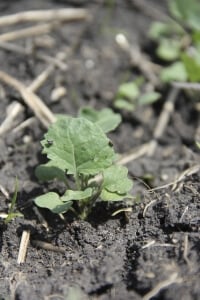 As with many crop types, introducing a new species to an area typically results in a bit of a honeymoon period — the crop adds diversity, possibly alleviating weed and disease pressures, or perhaps is unscathed by the existing insect spectrum. Over time, of course, these benefits wane, as the diseases and pests discover their new host.

In the meantime, and especially if that new crop yields well, profits well, has a domestic market and more, farmers push the envelope ever so slightly on recommended rotations. Not immediately getting burned means you can push them a little more.

But all good things must come to an end. And while canola is one crop that has continually offered improvements in yield potential, disease resistance and more, each year brings new challenges. Heavier disease pressure and more insects that love the tasty leaves and seeds has resulted in the input costs on canola increasing, eating into profits. Blackleg resistance is breaking down. And now comes the threat of clubroot.

Hot on its heels is possibly yet another new threat — verticillium wilt, a disease found for the first time in all of North America last fall in Manitoba. The finding could be a very isolated case, but what verticillium wilt, clubroot, blackleg, sclerotinia and some insect pests all have in common is that they thrive on tight crop rotations.

It’s just biology catching up with economics, really, but the fallout is abundantly clear — canola has become high maintenance and, frankly, bloody expensive to grow, even for farmers who have a strict one in four rotation.

Which brings us to this week’s poll: Has the threat of new diseases or the increasing management of the crop got you rethinking your cropping plans? Do you plan to lengthen the canola rotation on your farm?