The number of people in British Columbia enjoying chicken or turkey for a Christmas dinner this week likely won’t be impacted by the outbreak of avian influenza in the province, according to survey results released by Chicken Farmers of Canada on behalf of the poultry and egg industries today.

The results show that British Columbians realize the disease is not a food safety risk: 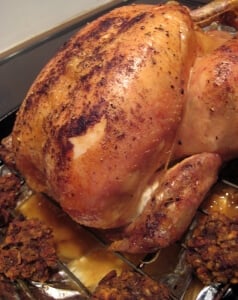 “We want to reassure the public that yes, poultry and egg products are safe to eat,” said Ray Nickel, President of the BC Poultry Association, following the release of the survey results. “Health Canada has stated there is no evidence that consuming poultry or eggs can transmit the avian influenza virus to humans.”

Nearly 250 thousand chickens and turkeys have died or been euthanized on the 11 farms where the H5N2 virus has been confirmed in the Fraser Valley. Some of those farms were producing birds that could have been destined for holiday dinner tables.

“We’ve been working hard to ensure that turkeys are available to everyone who wants one for their holiday dinners,” said Michel Benoit, General Manager of BC Turkey Farmers, “We’ve supplemented our stock with turkeys from other provinces and prices will remain stable. So everyone can continue to enjoy this festive time of the year.”

The Canadian Food Inspection Agency is working with producers on limiting and closely monitoring any movement of poultry or poultry products in BC.

“This is the first time a Eurasian lineage highly pathogenic H5 virus has caused an outbreak of avian influenza in poultry in North America,” said a statement from the CFIA.

There have been no reports of H5N2-related illness in humans, but the CFIA says public health officials are monitoring workers on farms where the virus has been detected.

So far the virus has not been found in wild birds in Canada, but further studies are underway.