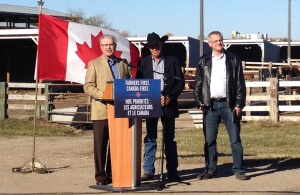 Agriculture Minister Gerry Ritz with Dave Solverson of the Canadian Cattlemen’s Association and Jurgen Preugschas of the Canadian Pork Council (l-r) responding to the COOL ruling in Saskatoon on Monday.

The World Trade Organization has ruled against the United States once again in the ongoing dispute over American country of origin meat labeling (COOL) rules.

Implemented in 2008, the Canadian government says COOL is costing Canadian cattle and hog producers a billion dollars per year.

The labeling rules have had a “detrimental impact on the competitive opportunities of imported Canadian livestock,” according to the WTO compliance panel ruling made public on Monday. The ruling was shared confidentially with the Canadian, Mexican and American governments back in July. A Wall Street Journal report in late August indicated the WTO panel had ruled in Canada and Mexico’s favour.

“Today’s WTO compliance panel’s report re-affirms Canada’s long-standing view that the revised U.S. COOL measure is blatantly protectionist and fails to comply with the WTO’s original ruling against it,” said Agriculture Minister Gerry Ritz and International Trade Minister Ed Fast in a statement responding to the ruling. “The WTO’s clear and consistent findings in support of Canada’s position effectively supply a clear message to the U.S.: End this protectionist policy that creates economic harm on both sides of our border, and comply with your international trade obligations.”

An appeal by the U.S. is possible, but if the ruling is upheld, the door would be open for Canada and Mexico to implement retaliatory tariffs against U.S. imports. The Canadian government published a list of American products that would be subject to this retaliation over a year ago.

The Canadian Cattlemen’s Association is urging Ottawa to move ahead with retaliatory action if the U.S. doesn’t make changes to the labeling rules.

“The compliance panel report leaves no shadow of a doubt that the U.S. COOL legislation is causing discrimination against live imports of cattle and hogs into the U.S. marketplace,” said CCA President Dave Solverson. “Until COOL comes into compliance with the WTO, the CCA will continue to insist that the Government of Canada prepare to impose prohibitively high tariffs on key U.S. exports to Canada, including beef.”

The American Meat Institute and North American Meat Association are also urging the U.S. government to bring COOL into compliance with its WTO obligations.

“The WTO decision upholding Canada’s and Mexico’s challenge to the U.S. COOL rule comes as no surprise…By being out of compliance, the U.S. is subject to retaliation from Canada and Mexico that could cost the U.S. economy billions of dollars,” said a statement from the AMI and NAMA. “While the U.S. has the option to appeal the ruling, we encourage USTR and USDA to instead work together with the industry and Congress to amend the COOL statute so that it complies with our international obligations and brings stability to the market. Such a change would help restore strong relationships with some of our largest and most important trading partners.”