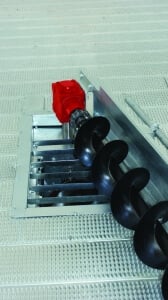 Superior Manufacturing’s new grain bin unloading system maintains upload speeds up to 6000 bushels per hour, but with a few changes to increase reliability, efficiency and ease of use.

The unloading system now features an 11-inch U-Trough, adding a full inch to the previous diameter of the tube, while maintaining the 9-inch auger size. The traditional style, though effective, can see added stress and occasional damage to the grain, as it’s pressed and compacted against the inside of the tube. Now, the tube has greater, yet gentler capacity.

In addition, Superior Manufacturing has attached a 7-inch power sweep with new couplers, an improved back pate and a drive wheel with a 16:1 gear ratio.
The system’s sumps are covered with rack-and-pinion gates with roller bearings. In the event of a plug, users can access all system controls and sumps from outside the bin, including the centre pump, which is accessible via its neighbouring sump.

Engaging the auger is relatively simple, with an over-center lever and adjustable motor mount. The new hinged discharge covers are easily opened and closed, which makes unloading quick and closing for winter months a simple procedure.

Superior’s hopper, farm and commercial bins range from 1850 bushels to more than 790000 bushels in capacity, with a lifetime roof warranty and some of the largest vents in the industry.