Switching between corn varieties on-the-go while planting is showing a yield benefit, according to Kinze, as the Iowa-based equipment manufacturer ramps up production of its multi-hybrid planters.

The last time we heard from Kinze’s Luc Van Herle on Real Ag, the company was rolling out its new electronic metering system for its 4,900 series multi-hybrid planting units. 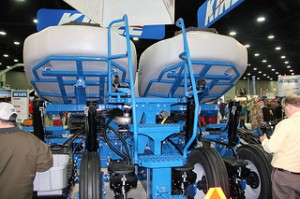 Bern Tobin caught up with Van Herle at the Farm Progress Show in Boone, Iowa in late August for an update now that the new Kinze machines have seen some more time in the field.

The unique feature with the Kinze 4,900 multi-hybrid planter is that it can switch between two varieties of seed on the fly.

“In any given field you typically have different soil conditions, topography and drainage. In the past, a farmer would have to make a compromise decision on which seed variety that would work with all those conditions, but no more,” explains Van Herle in the video below. “Now this farmer can pick a seed variety that is very aggressive and will produce well in the well-performing areas, and a more defensive variety for areas that are perhaps not as well-drained, have high pH or whatever it is.”

So how much of a yield bump can corn growers expect from switching between two varieties?

“The results have been extremely positive. We’ve seen yield increases anywhere from five to nine bushels per acre,” he says.

Van Herle also discusses the actual field operation of the Kinze multi-hybrid planter and when it could be available in Canada as part of his conversation with Bern.