Introduced in August, Grain System Inc.’s (GSI) VersaLoop round tube chain conveyer, can move up to 6000 bushels per hour and can reach a maximum incline of 60 degrees. 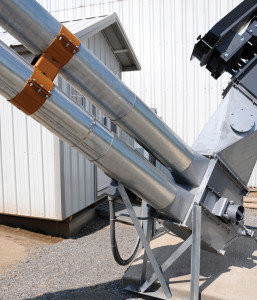 The Versaloop will be debuted in the first quarter of 2015, along with the four-inch corrugation in GSI’s 40-Series Bins. The conveyor, according to Greg Trame, GSI global product manager for storage, offers versatility and the conveyor is easier to replace than an auger.

“It’s quieter, doesn’t wear like an auger and also moves grain more gently and efficiently,” Trame said in a release. “And, with its round tube design, it offers excellent clean-out compared to loop conveyors with square boxes.”

The VersaLoop is easy to maintain, with a direct drive system sans belts. The motor, gear box and chain take-up are all easily accessed at one end of the tube.

RealAgriculture caught up with Greg Trame at Iowa’s Farm Progress Show. In the following video, Trame describes how the Versaloop functions, the sizes its available in and what makes it superior to traditional augers.

Or, check out the audio-only version on Soundcloud: