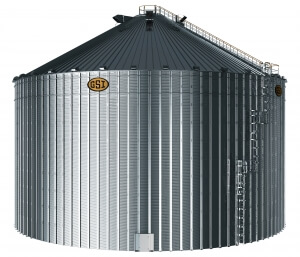 Grain Systems Inc’s (GSI) 40 series bins are now available with four-inch corrugation. The bins, offered in 2.66-inch corrugation since their launch in 2013, still use the optional Z-Tek Roof System, but are designed to be built taller, offering capacities up to 282 000 bushels.

“We now have a much more comprehensive bin offering along with additional features, such as 2-ring walk-through doors,” said Greg Trame, GSI global product manager for storage, in a release.

The optional Z-Tek Roof System, aaptly named for the z-shaped rafters and purlins, maximizes strength while minimizing rotational torsion. The increases in peak and snow load capacities mean the roof system can handle up to 50 000 pounds.

RealAgriculture’s Bernard Tobin caught up with Greg Trame at Farm Progress Show. In the following video, Trame explains the changes to the roof, stiffeners and of course the new 4″ corrugated  of the 40 series bins.

Or, take a listen via Soundcloud: