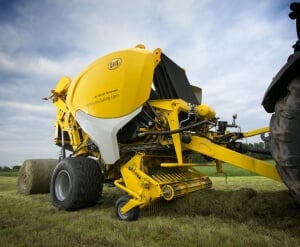 The idea isn’t new — non-stop round balers have been toyed with for years by manufacturers — but its one that has yet to be perfected. In 1986, Claas unveiled the Rollant Rapid 56, a non-stop round baler with a pre-chamber. In 2012, Krone unveiled the Ultima, a commercial, non-stop baler/wrapper. Now, Vermeer, along with its European partner Lely, has announced the development of their own  — and the first — fully continuous round baler.

The Lely Welger CB Concept starts forming a bale while the previous bale is being wrapped. In other models, the crop is held in a pre-compression chamber, only to begin forming a bale once the previous bale is complete. This, according to Lely, makes their baler the first fully continuous round baler, and means it will be the first to handle heavy crops without the need to slow or halt forward movement.

It’s certainly an exciting concept, particularly for the forage industry, an industry hungry for innovation and added efficiency. Producers will no doubt wait with baited breath, for another choice, for a smooth ride, to bale without stopping, to produce 110-130 bales per hour and — perhaps — the reassurance that they may never have to hear the excruciating alarm of an over-sized bale again.

Lely and Vermeer still have some fine-tuning and testing to do in the field, which should take a couple of years. Providing all goes well, the companies hope to have the baler ready for commercial markets soon thereafter.