Beyond the “cool” factor, the value of unmanned aerial vehicles (UAVs) for farmers comes down to how they help them make more-informed decisions. 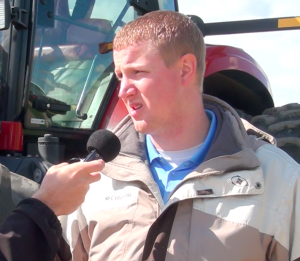 “If we just talk about stand, that one component can really help you with marketing. You can forward market grain with some more confidence, as well as replant decisions, fertility decisions, fungicide decisions — there are a lot of things that relate to that one component,” he explains in the video below.

So far, the plant stand data is mainly collected on corn and soybean acres, he says.

“That’s where we have the most analysis that we can provide to a farmer. We’ll go into some other crops as well — sunflowers, sugar beets, potatoes, but predominately corn and soybeans,” says Poulson.

“It’s opening up an opportunity to look at your crop from above, detect problems sooner and in a timely fashion. It’s going to be a huge industry. There are many other applications that will come later, like spraying and different things,” he says. “It’s going to help us be better stewards to the land, and make better decisions to minimize inputs and maximize outputs.”

Or listen to the interview: